During our summer, we’ve been working on the LEAP Encryption Access Project’s web app. Some email providers have been looking for a way to select the users who can sign up for their service, or to limit the number of new sign-ups. As a solution, we implemented a new field on the signup form that asks for an invite code: New users will have to receive one before they can create a new account. We also set up the necessary validations so that you can only sign up when you have a valid, unused code and built a way for admins to generate new codes to give out to new users.

Our finished invite code in action

Our coaching team was really helpful. We honestly can’t thank them enough for their time and effort. Almost every day, we had sessions with at least one of them and learned about a lot of new and interesting things. Sometimes we were just programming, other times it was more about theory and general coding knowledge. Some examples of the topics we covered are Test Driven Development (TDD), Continuous Integration (CI), CouchDB, (a lot of!) Git (oh Git, we tried really hard to become friends), project management and agile development…

Since we were mirroring our current work status and github issues on our kanban board, we have accumulated quite a collection of cards with finished stories. Every week or so, we dumped our signed-off issues in a big box to make more room on our board. We’re looking forward to emptying our box of completed stories when we finish the project and reminisce about all the fun and the struggles we encountered while resolving the issue.

What else we’ve done

We won tickets to two conferences via the first conference raffle. Luckily for us, we got into the conferences that are relatively near to Hamburg so we didn’t have to pay too much to get there. The first conference was the Eurucamp in Potsdam (near Berlin) where we got to know many other passionate Rails Girls. The other one was in Dortmund and was called Open Tech School (OTS) Conference, where Anke and I got pretty lucky! We attended two different workshops on the second day of the conference and were given a phone and a drone to take back with us to Hamburg. We held lightning talks at both conferences.

Because we were so impressed by the lively Ruby community in Berlin, we decided we needed a learner’s group in Hamburg as well. Our group is called “Hamburg Gem Sessions” and has about 7 attendees, which is pretty awesome given that we’ve only had a few meetups!

Not only did we go to the conferences proposed by the Rails Girls, but we also got a few opportunities to go to other ones, such as the Dine and Discuss by the Hamburg Geekettes and the Polymer Summit in Amsterdam. On our international RGSoC day off (where we were supposed to spend our time doing anything but code), we decided to help at our local donation center for refugees at Messehallen. We were busy folding donated clothes for a few hours - a great feeling to leave the place just a little bit tidier than before!

Folding donated clothes on our RGSoC Day Off (Photo: Aya/Anke)

What we liked best about our Summer

We were really happy to get such a warm welcome from ThoughtWorks, our coaching company, as well as the whole Rails Girls Summer of Code community. We felt very lucky to always have a friendly, patient coach around to help us when we got stuck or to give us a session on software development. 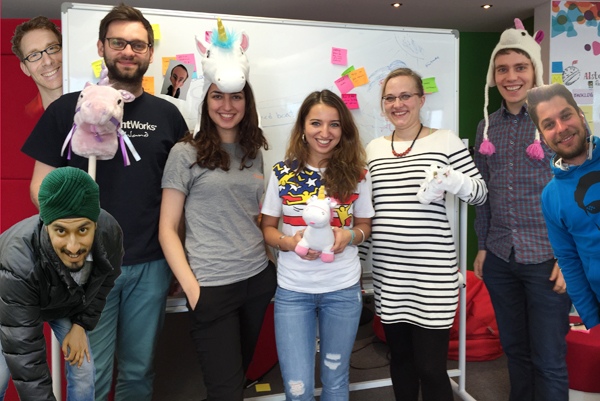 Our team of coaches and burgers ;) (Image: Anke)

Beyond our everyday office life, it was great to feel like we weren’t just a tiny team of two working in isolation but instead part of something bigger, coding and learning at the same time as 19 other teams all over the world. Too bad we can’t all have one big meet-up with everyone because we’d surely have a lot to talk about and celebrate! But it was wonderful to meet some of the teams at conferences and get glimpses of other teams’ work on Slack, the blog and daily logs.

We also loved the welcoming atmosphere at the conferences and meetups we attended. Being just a small newbie burger in a big world of software development can be intimidating - but we soon discovered that people were very supportive and excited to hear about the Rails Girls Summer of Code. We gave three lightning talks about RGSoC and our progress to spread the word and were very happy with how friendly and encouraging the feedback has been. <3 You hear a lot about Ruby/Rails having a great community and we found out that it is really true.

Outside all that community love, it has been really motivating that there are some email providers out in the “real world”, waiting for this functionality to be implemented so they can start using LEAP. So we haven’t just been working on a sample application to prove that we’ve learned something (which is what one often ends up doing when learning to code, it seemed before RGSoC…) but instead were able to have real users in mind who will be using our work as soon as it gets implemented. We really hope they will like it! :)

We still haven’t had the hamburgers by the Alster that we were planning on in our first blog post. That still has to happen! Also, we’re excited to see our code merged into the LEAP project. While the main functionality is already done, we also still have a few features in our backlog that will make it even nicer to use, so we won’t get bored in our last weeks.

Hopefully, we’ll continue to build our coding skills! We’ve learned a lot of things during those summer months but often, the questions grow at an even faster rate… 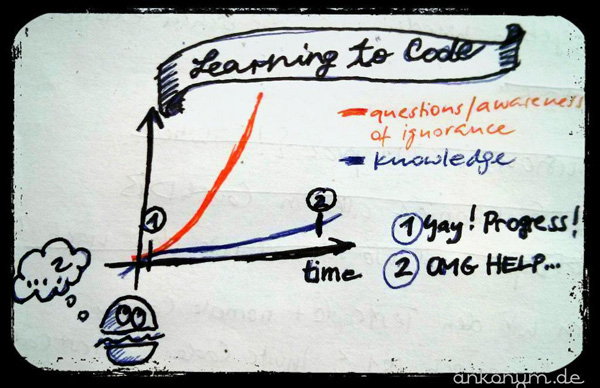 After RGSoC, Aya will be travelling on to California to attend Draper University and found her first startup! Follow her adventures at @ajafferson. Anke (@ankonym/ankonym.de) hopes to continue coding but will be distracted for a while by her side project: Her due date is in December to welcome a member of the next generation of programmers into the world.