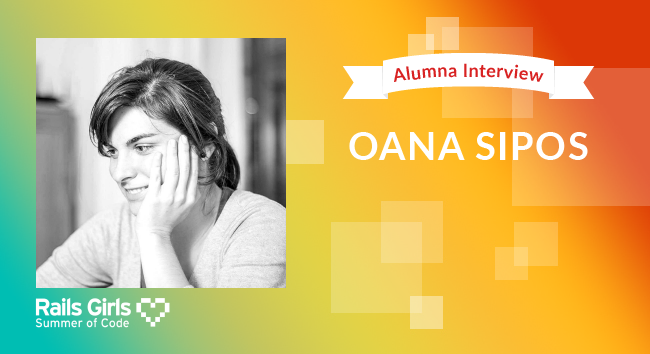 For the first installment of our “Alumna series”, we’ve spoken to Oana Sipos, who took part in RGSoC 2013; she’s currently living in Belgium but is planning to move back to her home country, Romania, very very soon. When she’s not busy coordinating Rails Girls events (she’s organised four editions in Brussels so far and has started the Cluj and Timisoara chapters), she loves playing with bits all day long!

Where do you currently work and what do you do?

I am currently working for UnifiedPost, a Belgian company developing its own products for document processing where I am a combination of a developer and a technical writer.

My day is a nice mix of documentation, writing tutorials for all kind of internal gems we develop and training people on the platform built in-house. It is a bridge function where knowledge transfer is critical.

Ever since high school I liked the mystical side of it – it felt powerful and intriguing to know programming-related stuff. At university, I studied Telecommunications; so technical studies, but still not programming-oriented enough. So I took my heart in my hands and started learning by myself and with the community’s support.

Is a career in tech something you had planned all along? Where did you work or what did you study before?

Not sure I have planned it, totally not after finishing university; however a semester at KU Leuven brought it more on my way so I gave it a chance :) Sometimes, the best things happen when you are planning the least.

Which of your skills helped you most to be successful during RGSoC?

I was part of a volunteering team in RGSoC, as I couldn’t find another girl to pair, and (now I say) luckily that lead to organizing all those Rails Girls events. Critically thinking, it wasn’t necessary a skill, but the ambition / perseverence / stubborness to join even if I was by myself, was what made my RGSoC experience a fruitful one.

Which difficulties did you face during the program — and how did you overcome them?

Motivation was definitely the first one of them — being alone there was just too difficult to keep it up. Discussing with people around me helped a bit, but not sure that made the trick. Having a clear to-do list and speaking up when something is not clear would definitely be my allies, were I to start all over again.

How did Rails Girls Summer of Code help you get to where you are today?

A very nice part of Rails Girls Summer of Code was that they handled free tickets to conferences. This is how I got to go to ArrrrCamp in Gent, Belgium and give a talk. That was a way to spread the knowledge about RGSoC and at the same time, a call to organize Rails Girls Brussels since I could find no girl to form a team. By the end of the conference, I had a bunch of developers interested to help and coach and also I was introduced to my current company :) so, tl;dr life changing!

Who do you look up to in your field? Do you have any role models?

My friends who told me about Ruby definitely are. All the people in the Ruby community (with special thanks to Belgium Ruby User Group) who have been very helpful and encouraging also. I cannot pinpoint to a specific person, but they are definitely those closer to me, in the community.

Do you have any advice for future Rails Girls Summer of Code students and for women who wish to work in tech?

Working in tech is challenging, but not nearly as difficult as it may seem. Just give it a try, keep the ball rolling and ask for advice when you are stuck. Don’t stay stuck, there are plenty of people out there willing to give a hand. Walk before you run ;)

I must start with “it is not about coding all day long”. It can be, but there are other functions which need both an understanding of technical specs and a set of soft skills. Get out of the box and for sure you will soon identify all kind of opportunities.

Is it difficult to be a woman in tech?

This is about knowledge more than it is about genders. I was the only girl in my office of 13-14 developers and hardly felt different because of being a woman. It might need a while to prove yourself, but I guess there is this starting point everywhere when you are new in a team. Just go for it and don’t let this stop you ;)