Code in Motion: Story of the XYZ team in Berlin

Team XYZ has had the wonderful opportunity to attend the Codemotion conference in Berlin, and these are some of the highlights of our experience.

Berlin is just a stone’s throw from Prague, so this was not our first time visiting it. We both absolutely love this amazing city! The conference took place in the KulturBrauerei - a huge complex of former industrial buildings (with cool names such as Maschinenhaus, Flaschenabfüllhalle or Pferdeställe), which are now being used as a venue for all kinds of cultural events. The location has a unique industrial vibe and it really added a zing to the conference. 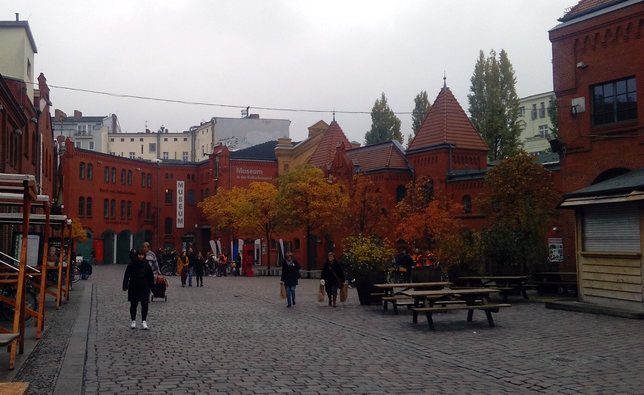 Codemotion Berlin 2016 offered an array of insightful tech talks on 4 stages (one of them entirely dedicated to Community speakers) over two days. Besides, it provided a chance to meet fellow attendees from all over Europe and beyond. We had the opportunity to make friends and network with visitors from Germany, Italy, Poland, Slovakia and many more countries.

There were so many interesting talks, but there is not enough space to talk about all of them. So we selected just some of them that we found interesting: 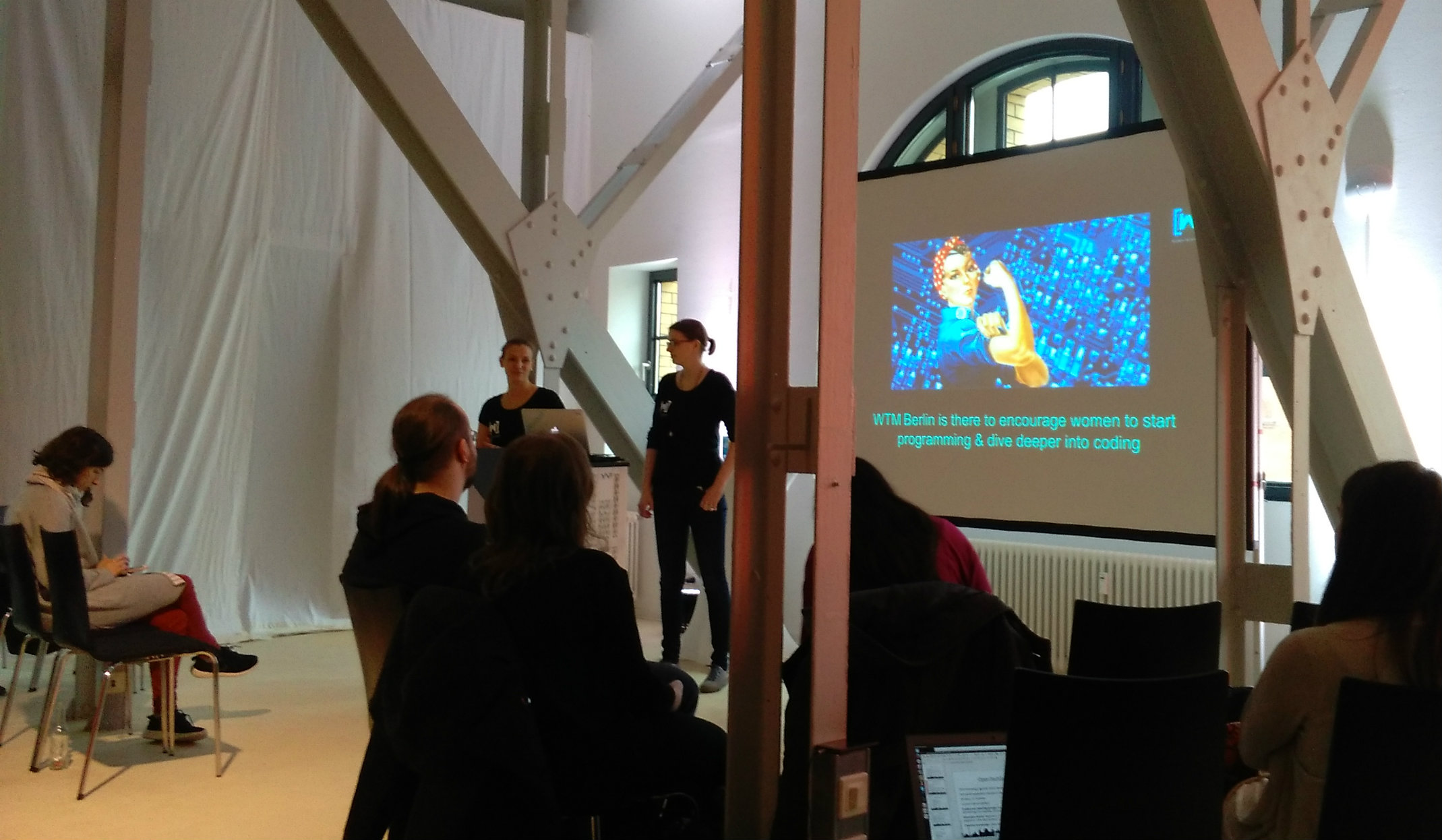 Andrea and Mirjam talked about the Women Techmaker group in Berlin and presented their community activities. They both took part in the bi-weekly Android course and built their own real Android apps, which they then showcased. Pretty impressive! 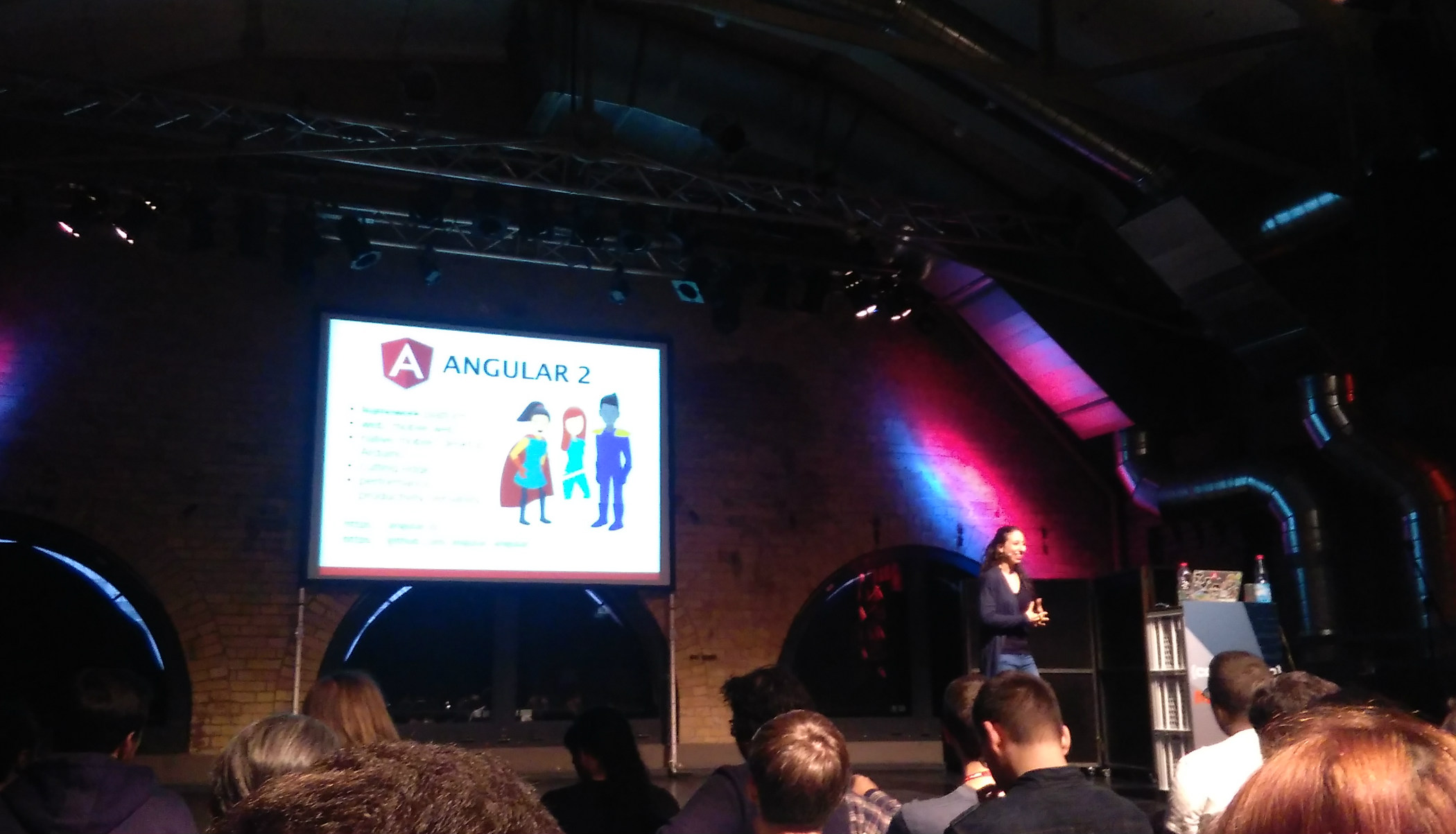 Shmuela during her Angular 2 talk (Image by Team XYZ)

Shmuela explained the core concepts of Angular 2 in a clear, easy-to-follow way. Besides, she also briefly introduced her shiny new project ngGirls, which aims to teach women coding through Angular 2. Way to go!

Knowledge is Power: Getting out of trouble by understanding Git - Steve Smith 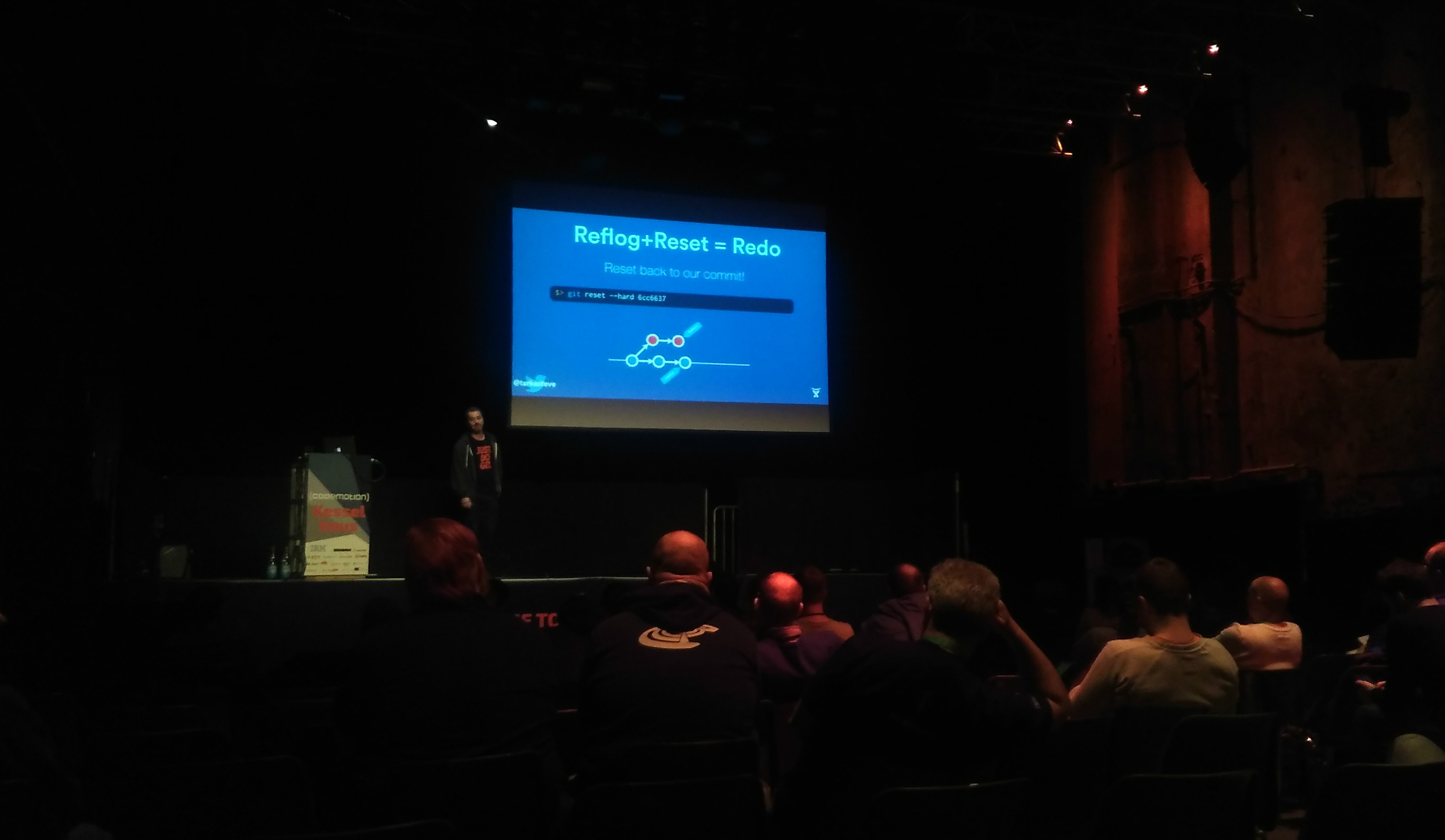 Steve unravelling the secrets of Git (Image by Team XYZ)

Steve spoke about what is happening under the hood while we use Git. Since we both went through our fair share of struggle and frustration over seemingly confusing Git behaviour during our Summer of Code experience, we found this talk very helpful and reassuring, as Steve managed to summarize the concepts of Git in a very clear and logical way. We still learn something new about Git every day :)

Costs of the Cult of Expertise - Jessica Rose 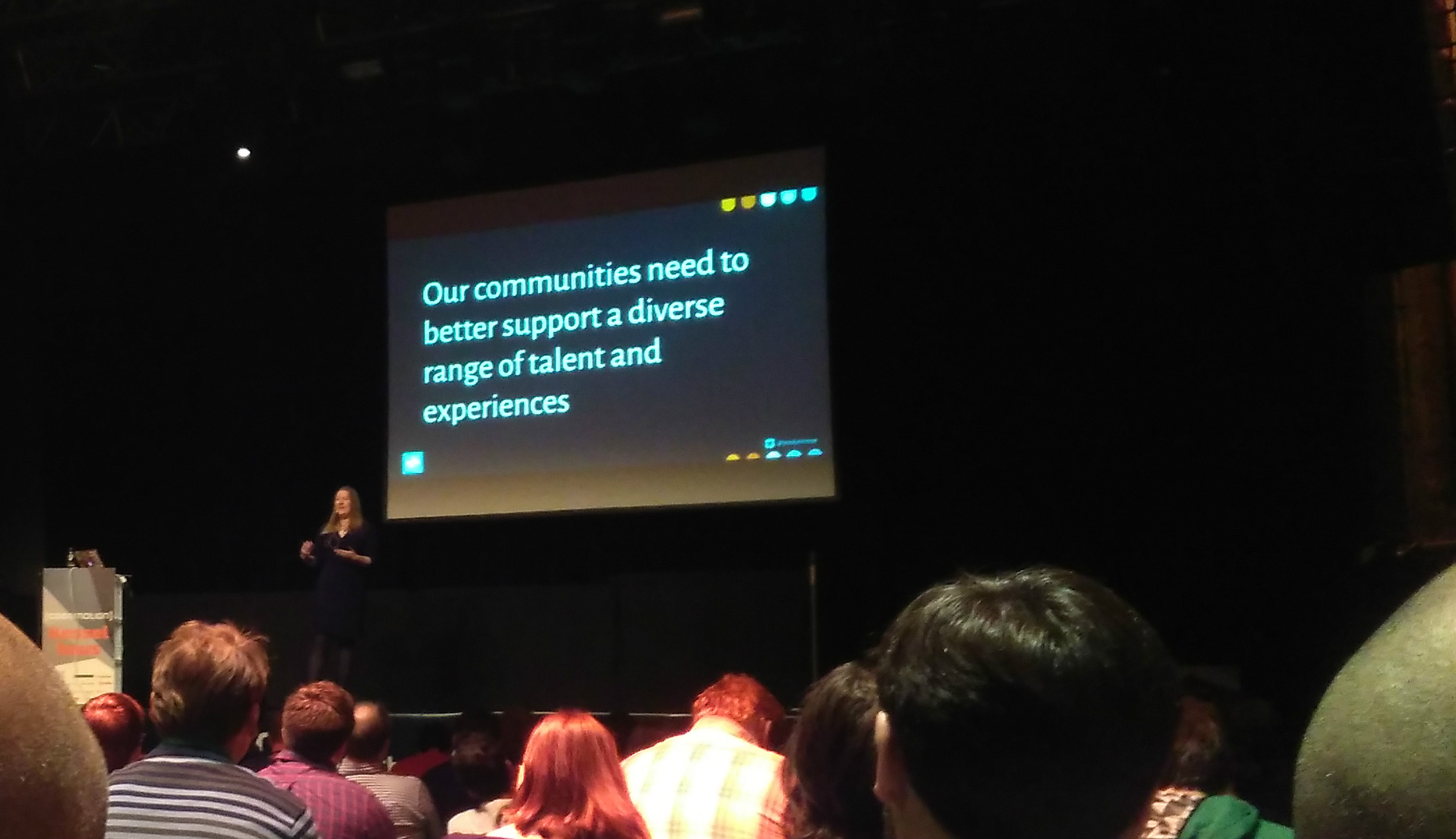 In her keynote on day two, Jessica presented us with some serious food for thought: What does it really mean to be an expert? Is the emphasize on expertise really the way to go in hiring? Where do recruiters often go wrong? Why is it important to reward the talent? And how about yourself - do you feel rewarded in what you do? If not, do you really want to stay where you are? The recording of Jessica’s talk (just like most of the others) is available for you to listen.

What did AlphaGo do to beat the strongest human Go player? - Tobias Pfeiffer 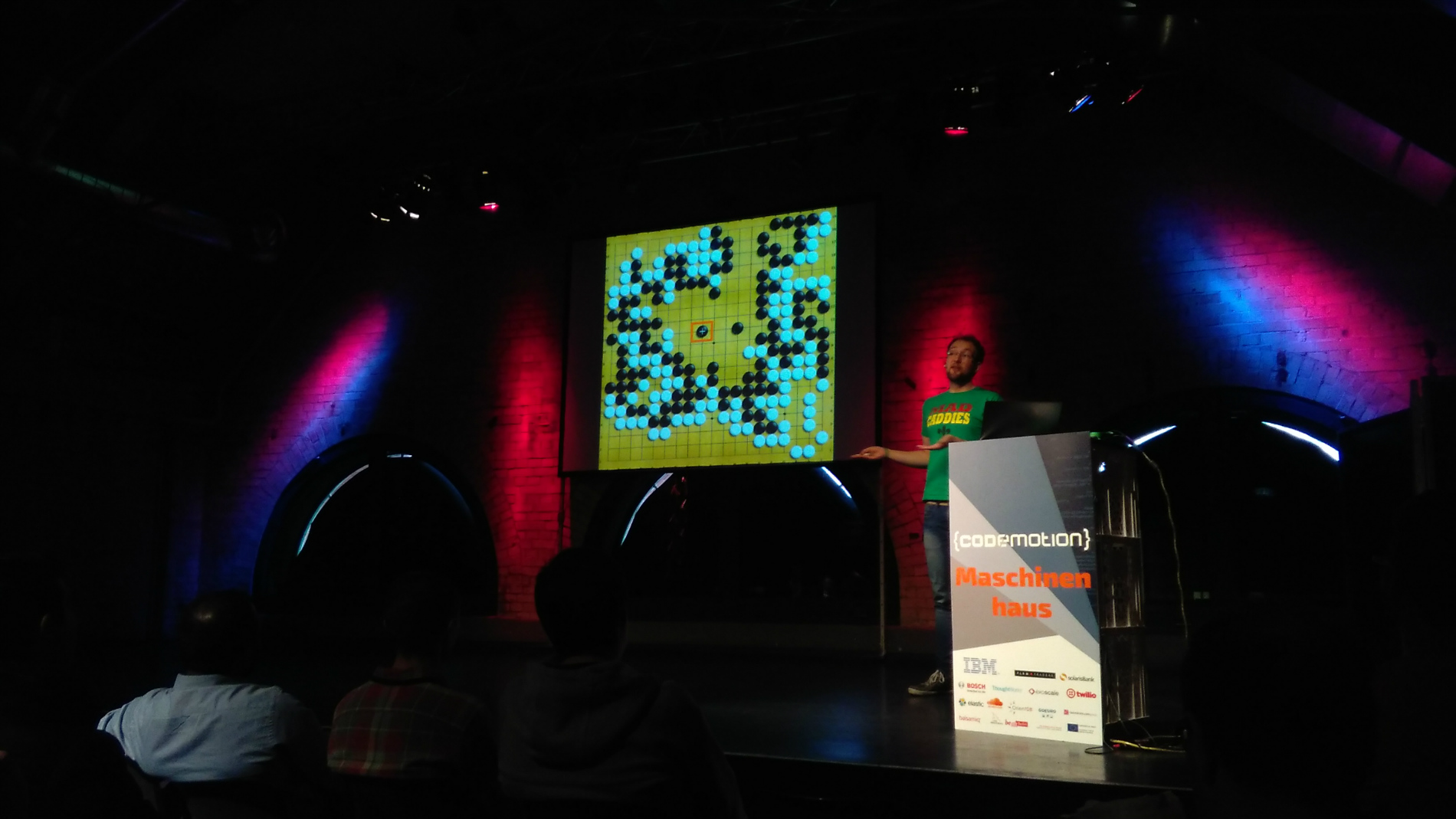 Tobias explaining the rules of Go (Image by Team XYZ)

The AlphaGo team has recently made headlines by beating the human Go champion Lee Sedol - an accomplishment which experts deemed unlikely to happen at this time, if not downright impossible at all. Tobias first introduced us to the concept of the game of Go and what makes it so unpredictable, and followed by explaining the algorithms which made the impossible come true.

Thank you for our community tickets, Codemotion! Attending the conference has been a truly enriching and inspiring experience. And of course, thank you, Rails Girls Summer of Code, for making this possible.

Stay tuned for our upcoming report about dotCSS and dotJS in Paris!