I had the privilege to attend RubyConf held in Melbourne last month as a part of the Rails Girls Summer of Code program. The Venue was set at the Melbourne Convention Hall and it was a great opportunity to meet so many interesting people in the Ruby community. Also a good learning experience.

Following are some of my personal favorite talks:

Shana Moore: So you want to become a software engineer

This talk was about her career-changing journey to become a developer. It was very inspiring to learn about the approaches she followed in her coding challenges and her technical interviews. She emphasizes on how hard work and passion always pays off. And encouraging more people to get into technology. It was awesome meeting this amazing gal!

It was interesting to learn about the challenges being faced by the ruby over other new functional languages like elixir and how can it be improved in the future — Dry ruby is the collection of next generation ruby libraries. How it helps you write clear, flexible, and more maintainable Ruby code. Each dry-Rb gem fulfills a common task, and together they make a powerful platform for any kind of Ruby application.

Ruby has its own limitations when it comes to dealing with the concurrency over Erlang or Elixir. This talk was about how making it better using an Actor model. It was great. 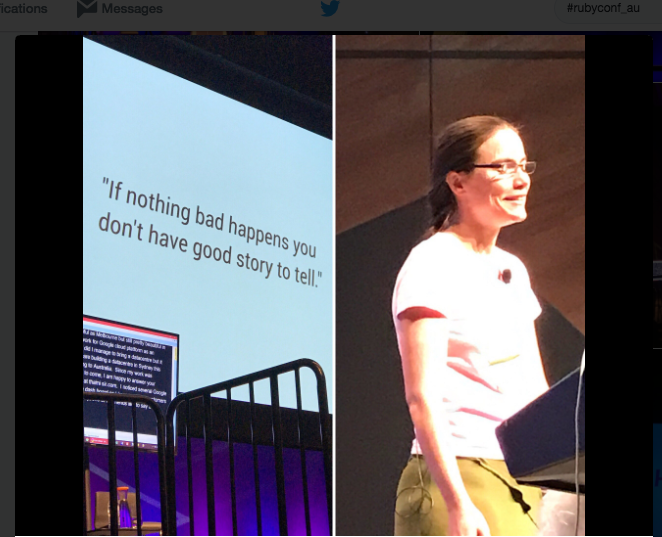 She mentioned: “If nothing bad happens, you don’t have a good story to tell”. She shared her experience working with the Google data center. She talked about the mistakes she made, which helped her understand the importance of automation. How having a team with different background added to the learning and could save a day in many aspects. It was a impressive one.

Apart from all these amazing talks, I enjoyed delicious food, unlimited coffee which was served all day. It was another grateful event. Thanks to all the people who made it possible. And many thanks to the RGSOC committee for sponsoring the tickets.