How they started to get into the open source world!

Jona and Xheni met each other 5 years ago at the University of Tirana, Faculty of Economy because both of them wanted to study for Business Informatics. At the beginning they didn’t “like” each other a lot because Xheni was an Inter fan while Jona a Milan fan, different teams that play in Italy and their fans “fight” a lot with each other. YES, you read it very well, so don’t get surprised if they know football rules/ football players/ teams pretty well because they are crazy about football. The good news is that they found something in common, yaaay 🙂 They attended together the first edition of OSCAL, Open Source Conference Albania, the first conference in Albania dedicated only to open source software. After meeting a lot of other FLOSS enthusiasts at the conference, they discovered Open Labs that is the community behind OSCAL. Open Labs organizes a lot of events dedicated to different open source projects like GNU/Linux, Mozilla, Wikipedia, OpenStreetMap, LibreOffice etc. Both of them were intrigued by the world of Linux, that’s how they first started contributing to open source and became FLOSS advocates. Now that they have been part of Open Labs for four years, you see them part of different open source communities because being part of a community has helped them a lot to gain new experiences, learn new things, make new friends and have fun! 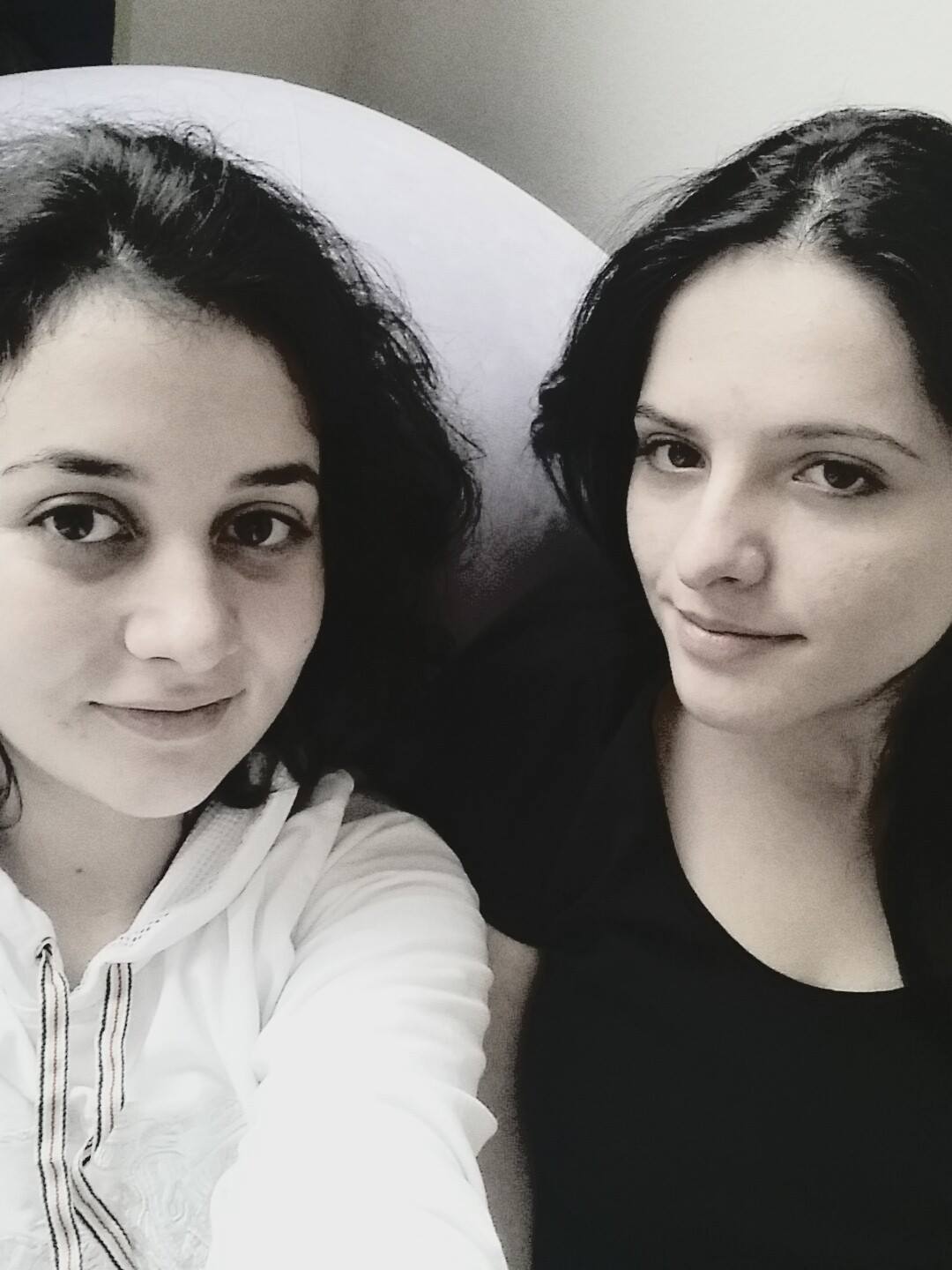 Jona was really interested to learn more on how to be a Linux system administrator that’s why she is part of the Fedora Project and became the first Fedora Ambassador in Albania promoting this operating system in her country. On the other hand Xheni was really interested on security stuff and that’s why she is studying Msc in Information Security and wants to become an ethical hacker. In the meanwhile, they have discovered the gender gap that exists in tech industry and especially in open source communities, something they don’t face at their local hackerspace because 70% of the members are girls. That’s why when they travel to different conferences they try to share the situation they have at Open Labs with other people to encourage them and feel more motivated. Even though not all the girls part of Open Labs know how to code, they are willing to learn, that’s why Jona and Xheni want to help girls start coding and get them on board. Their future plans include establishing a Django Girls and Rails Girls local community, starting with some beginner workshops at Open Labs. 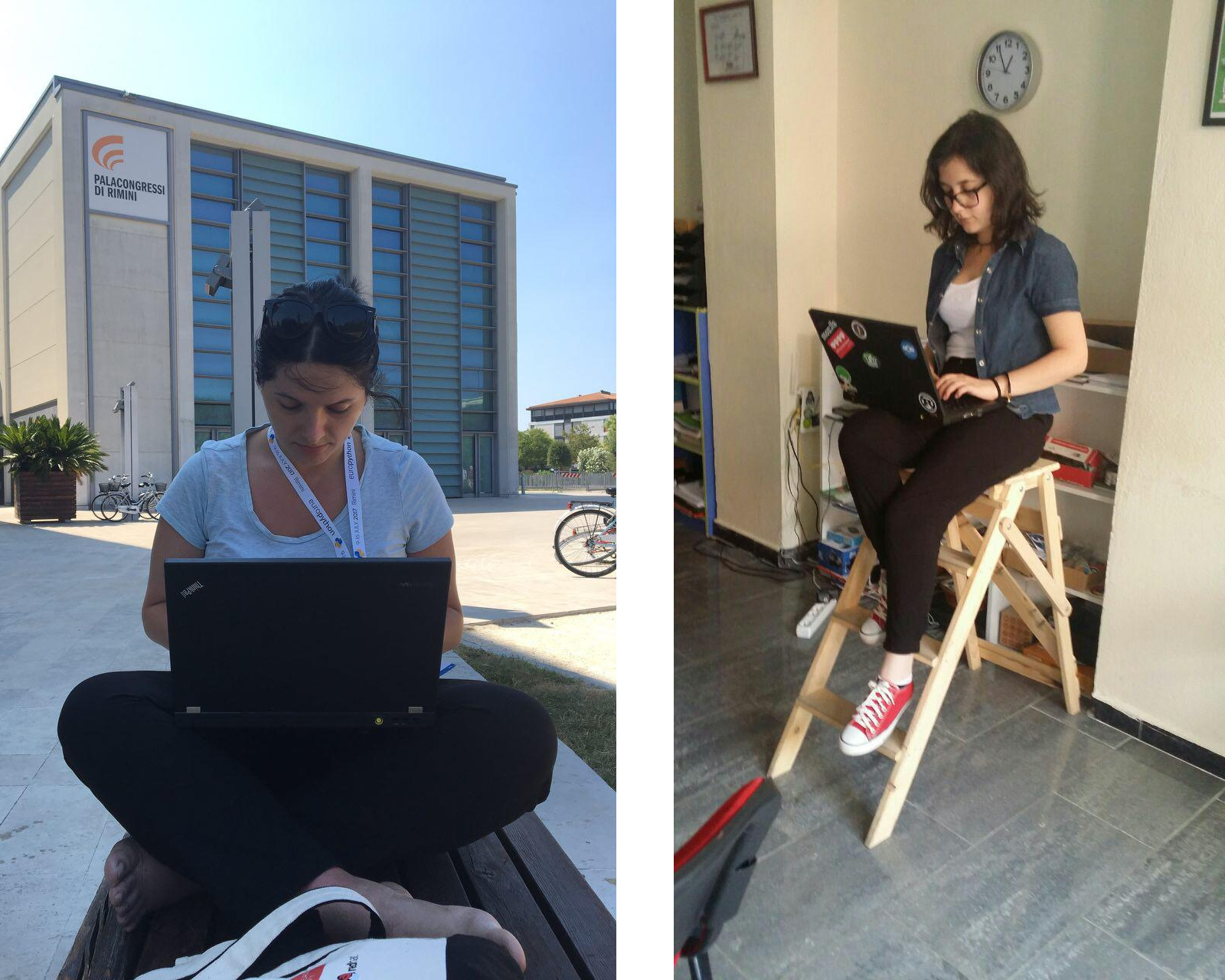 Jona’s and Xheni’s latest involvement into open source is Nextcloud, a suite of client-server software for creating and using file hosting service, where their contributions consisted mostly on promoting Nextcloud and translating it in their local language (shqip).

At OSCAL (third edition) they met Jan-Christoph Borchardt and had the chance to talk with him. After some months, they saw his tweet about a dedicated scholarship program that aims to foster diversity in Open Source since 2013, called “Rails Girls Summer of Code”. Both of them were really enthusiast and happy to hear about such a great opportunity that could help girls develop their skills and gain new exciting experiences. After posting this on the Open Labs forum to share it with all the girls, they even organized an “unofficial” meeting with all the interested girls to help each other with the process. It was the first time that 4 teams from Albania applied to be part of RGSoC!

After picking each other as teammates, Jona and Xheni had to decide about the project they wanted to spend all their summer working on. Wait, what about the name of the team? Hmmm let’s say they needed only a couple of hours to find the appropriate name for them. And it was not very difficult, because both of them are CODEAHOLICS. Yes, I mean it! They stay awake all night long and they like to sleep in the morning because for them is way easier to work when the place is very quiet, people are sleeping and the only thing that they can hear is their favorite music. Okay now let’s get back to the topic. After scouting all the projects listed, the first one that was deemed a perfect fit for them was Nextcloud. Why? Because they were already using it and they were familiar (not a lot) with the community. Both of them believe that when you use something and you like it, it’s very easy for you to start promoting and working on it, in this way you will always do something that you love and are not forced to. They decided to work on the contacts app and documentation part during the summer. After finishing the application all the albanian teams were “stressed” waiting about the final result. Who could imagine that we would be one of the lucky teams, being the first albanian team part of RGSoC! Imagine their happy faces when they saw the approval email, yaaay :D

The Nextcloud mentor is Jan-Christoph Borchardt, their coaches are: Joas Schilling, Morris Jobke, Aldo Ziflaj and Edi Hoxhalli, and their supervisor is Benedikt Deicke. They will be working and keeping in touch with them for any issue they might face, help they might need, etc. They have organized their workflow by creating a project at the Contacs app repo on Nextcloud organization on GitHub. To communicate with each other, they use IRC, you can find them on #nextcloud-contacts and #nextcloud-dev. Spreed app is their favorite choice when it comes to do the weekly video call with their supervisor. Xheni and Jona are really happy to be part of the Nextcloud community and to have this amazing team ready to help them when needed. End of August they will be in Berlin to attend the Nextcloud conference and meet in person all the community members. They will have the opportunity to share with the participants their experience as RGSoC students working on Nextcloud, so if you will be in Berlin make sure to be part of the conference!

Codeaholics just kicked off their first RGSoC event in Tirana!

On 1st of July they organized their first event at Open Labs Hackerspace at 6pm. A lot of participants attended and they were really interested on this scholarship and eager to learn more on how to apply for the next round of RGSoC. They also had a short video call just to say Hello to their amazing team, kudos to Laura and Jan for joining the video call. After the introduction to the program and the video call, they had a small party with the participants, that made the atmosphere more friendly and enjoyable. 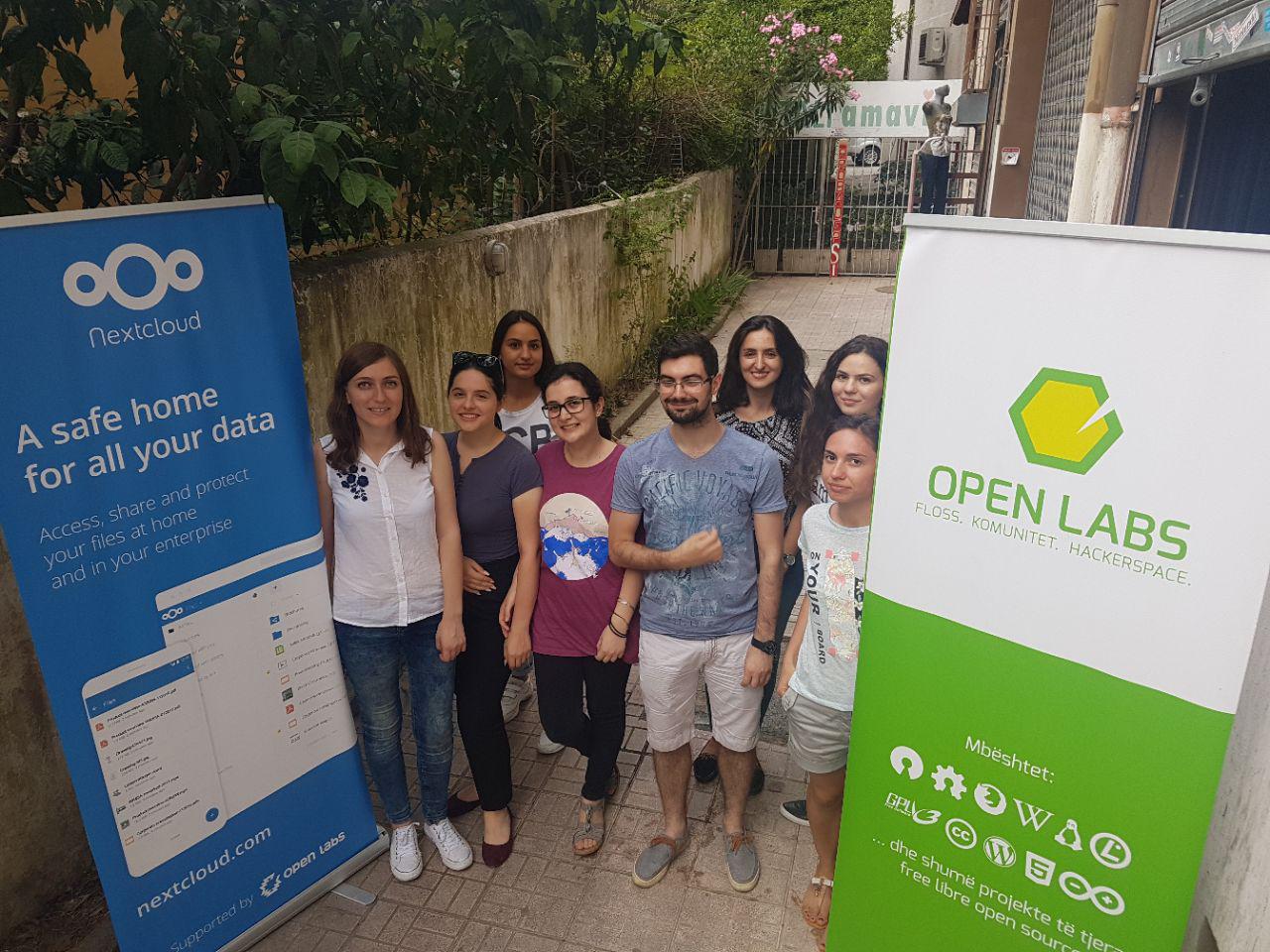 By the way, do you know the great news from their municipality of Tirana? The Municipality of Tirana, the biggest municipality in the country serving over 800,000 citizens, goes free open source by using Nextcloud! An important contributor in raising the public awareness on the importance of free open source culture in general and the public administration embracing it in particular, has been the local community of the Open Labs Hackerspace where Xheni and Jona are involved.

What they have done so far?

Nextcloud is a safe home for all your data – community-driven, free & open source. It is a very big project, with more then 30 teams working on contacts app, calendar, android, server, spreed etc. The project has a very detailed documentation which helps a lot, also a very active and friendly community. Being part of RGSoC and working on this specific project doesn’t mean to write only code but at the same time combining it with tutorials, learning new stuff not only related to AngularJS but even other concepts related to their work, put in practice what they both already know and shape their skills. Therefore, working on this project has helped them a lot related to the AngularJS part, their coaches have been really helpful (and patient :P) with them when they were working on different issues related to the Contacts app. Jan has done a great job with them, identifying some starter issues to work on, and working on the workflow they are following. 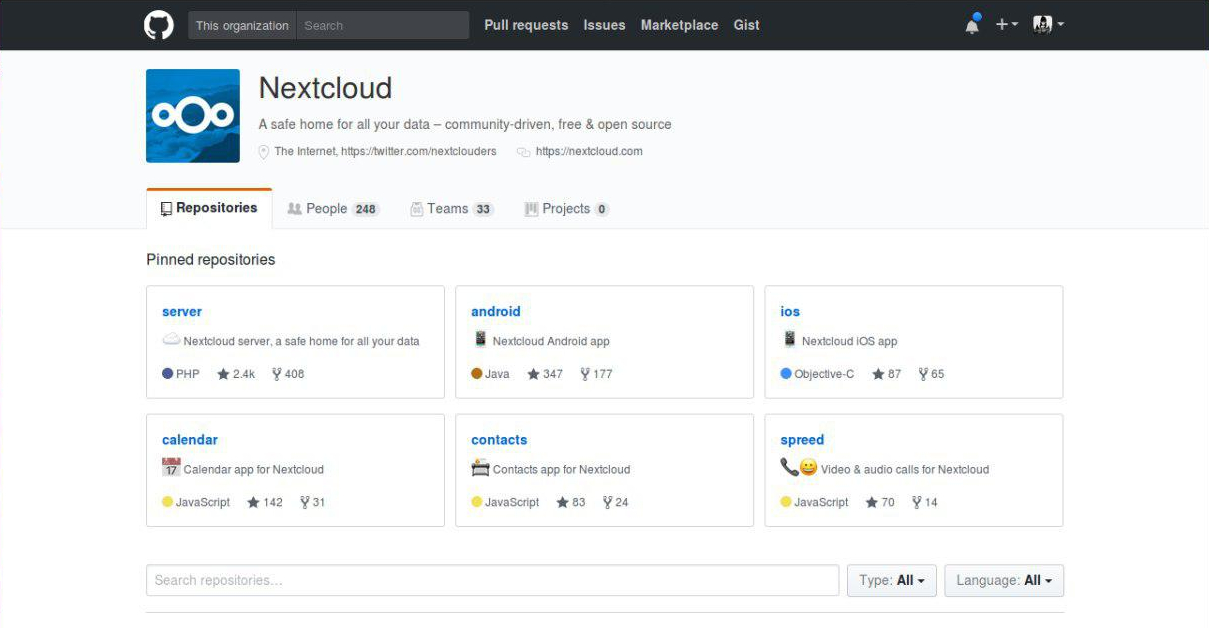 …Jona and Xheni want to thank everyone involved, their mentor Jan, their coaches Morris, Joas, Aldo and Edi, their supervisor Benedikt, and also the amazing RGSoC organising team for offering one of the best ways spending the summer to all winning teams!! Keep up the good work.

PS: Did we mention that they have a logo for their team? Check it out on their github organization for Codeaholics. And… don’t forget to follow them on twitter! :)