Participating in RGSoC 2017 not only gave a us the opportunity to work on an open source project, but also gave us lots of other opportunities so we can grow as techies. One of the most amazing opportunities we got from RGSoC 2017 was the conference offers. We got two conference offers, one for Dev Day 2017 and another for Ruby Conf AU 2018. And recently we participated in DEV DAY 2017, which was held at Cinnamon Grand Hotel, Colombo in Sri Lanka. Let’s see how interesting it was..😇

On 9th November 2017 early morning (8:00 am) we arrived at the Cinnamon Grand Hotel, Colombo in Sri Lanka. Both of us were very excited about DEV DAY and the first thing we saw when we were entering the hall, was a huge group of techies having breakfast; let’s say networking. After the registration, wearing our name tags, we also joined the groups to have breakfast together.🥪☕ And we were so glad that we joined them, because we met new friends who enjoyed listening to what we did during RGSoC and we also learned a lot about them.

After the breakfast, then arrived the most awaited sessions.🎉 Altogether DEV DAY 2017 had around 24 sessions, where two of them are opening keynotes, one is a closing keynote and the others are parallel sessions where we had to split up according to our interests.

Sessions started with Marcus Devold Soknes opening his keynote where he shared his experiences in Sri Lanka. One thing he tried to emphasize was looking at our products as a shop when we are measuring their growth. And he also talked about concepts like, design thinking, design driven culture, the lean start-up and etc. He shared that he adopts lean startup structure while making sure that the customer is always first. And he concluded his keynote sharing the words, “Keep it Simple”☝.

The second keynote was done by Satyajeet Singh , who is currently the Head of Platform Partnership in India at Facebook. During his session he talked about Facebook’s vision, which is to bring the world together. He also explained about the multiplier effect using the examples like Baby Chakra and Rappler. And to conclude his talk, he shared about Facebook’s services such as FbStart and Facebook Analytics. 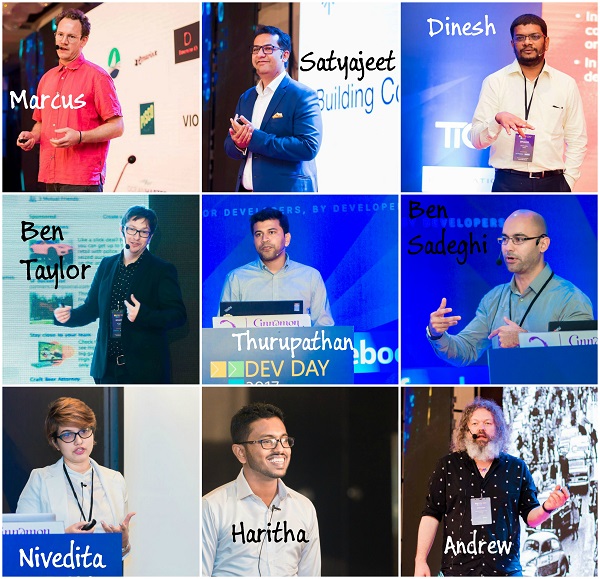 Then there was a short tea break with snacks ☕ and next came the parallel sessions. Just like the hall was split in to two for the parallel sessions, we (team fusion) also had to split in to two, so we can attend the sessions , according to our preference. There were 20 parallel sessions in three different tracks namely, DISC (DevOps, IOT, Security, Cloud), ACLA (Architecture, Coding, Lean, Agile), and IDEU (Innovation, Disruptive, Entrepreneurship, UI/UX). And we could attend six parallel sessions altogether. For some of the sessions we attended together, for some, we attended separately. But it was fun , because we could share the interesting points we learned from each of these sessions with each other during our evening tea break, which made the evening tea, tastier. ☕😁

And following are the parallel sessions we attended. 👇

During each of these interesting session we learned something new. Some topics were totally new to us, yet, were interesting. We learned about Big data, concepts like fuzzy categorization and Box plot method, the importance of using design patterns, data embodiment, how products like Google Home and Cortana are being a part of digitizing the world, the importance of mastering the storytelling for UX design, how important is the user in product development, cognitive services, Microsoft AI, cognitive computing, concepts in Machine Learning and many more. Most of these sessions were not just interesting sessions that gave us lot to learn, but also eye openers for us. 👀

And we should also mention about the amazing closing keynote done by Torgier Andrew Waterhouse, who is currently the Director of Internet & New Media at ICT Norway. He started his keynote explaining us about the possibilities of the technology. Then he raised the question, “How can we empower each other to be superheroes with technology?” , which made us think for a while, because why not? 💪🚀 Throughout his talk, he talked about the history of Internet, how it is being an effect on improving the societies, and how important it is for us. And he also said, “You don’t need permission to put something on the Internet” meaning we don’t need permission to innovate and launch it on the internet, which triggered us to think about our innovative skills. However he also emphasized the fact that we should use internet correctly. 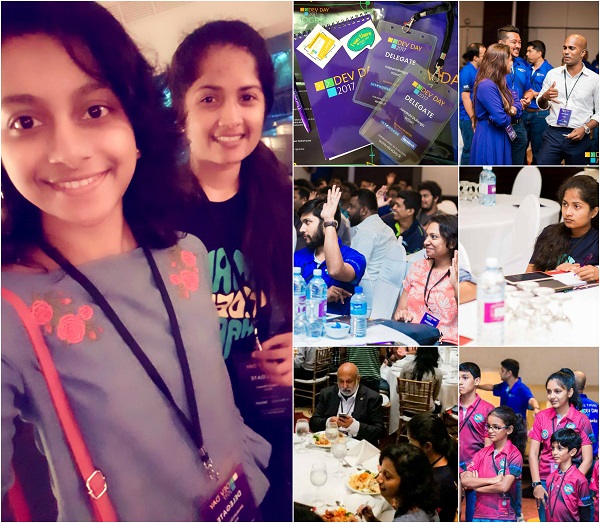 Apart from these wonderful sessions and tea breaks, we also got the chance to enjoy a wonderful lunch which was full of flavours. 😁 During the lunch break, apart from eating all the good food 🍝🍨🍰, we got the chance to network with lots of new faces for us, yet not so new to the IT Industry. One of them was Dr. Raomal Perera, who was also a Dev Day 2017 speaker. It was really nice to talk to him and the other new friends about our experiences and also about their experiences.

So this is how interesting was our experience at Dev Day 2017. It was indeed a great day for the both of us. And we still have one more conference to experience as a team, well, as Team Fusion. And that’s RubyConf Australia 2018. We are so excited!..😇 And we would like to thank our lovely RGSoC team for giving us these amazing opportunities. It really means a lot for us. You are the BEST.👍