Heya! We are Rahmeen and Akshita of team $we init. We both study in New Delhi, India, and are working on Probot this summer.

We’re both majoring in Computer Engineering from the same University, Netaji Subhas Institute of Technology, University of Delhi, and are in the same class. We met on Day 1 of college and have been good friends ever since. We started working together when we took an online course on web development. Brainstorming and discussing vividly on assignments and lectures taught us way more than we could have ever imagined. By solving each other’s difficulties and doubts and constantly encouraging the other in their lows, we ensured that neither of us was left behind.

Working with each other was such an enriching and enjoyable experience that we decided to team up with each other for nearly every project we took- classroom presentations, curriculum centric projects, Hackathons and now RGSoC. It would be no exaggeration to say that our common love for programming brought us in togetherness and strengthened our friendship. We were sitting next to each other(inseparably as always) attending a tech talk by our most adorable seniors, Prachi Manchanda and Ipshita Chatterjee when we first heard about RGSoC. Immediately we looked at each other and it was clear. We had a new goal, a new dream and what made it special was that we wanted to live it and realise it together.

And then was formulated “$we init” over a plate full of sizzling chilly potatoes at the college canteen. Rahmeen, the creative was suggesting mind blowing names as “OneHotEncoder”, “Sopho-no-mores” and Akshita the critic was invariably rejecting them all. And then, together again, they zeroed down to “we’re in it”, more “terminally” (please say you get the pun) stated as “$we init”. Rahmeen couldn’t be prouder of “terminalising” the team name thus (It’ll break her heart if you didn’t appreciate her).

Having worked with Javascript for almost a year now, we have fallen in deep love with it. NodeJS is one framework that we are extremely passionate about. We have worked with Node on multiple hackathon projects and want to explore it further.

Even before the project list was announced, we were perusing all the then ‘pending’ projects and that was when we found ‘Probot’ and were blown away by its idea almost immediately. We were completely excited by the concept of building Github Apps to automate github workflow. The fact that even we, who are mere beginners here, could install these apps on our repos and see the magic happen, was enough to transport us to the Probot slack channel within minutes after the after the announcement of final projects on 1st February.

The extremely welcoming nature of the community left us in awe. The project mentor, Gregor Martynus, replied to our introductory message on slack within seconds of sending them. He also supplied us with all relevant documentations to get us started. Never had we received such prompt and warm responses to our doubts from any organisation. And like that wasn’t enough, Gregor invited us to probot’s office hours. It was an unbelievable experience, to join such accomplished people on call right on the first day of introducing ourselves on their slack channel!

‘Probot’ seemed a perfect choice to us for three major reasons: * It is in the language and framework we’ve previously worked upon. Nodejs and Javascript are things that we want to explore further and excel in. * The idea of the project was completely awesome, given the usability, creativity and reach it promised. * ‘The Probot Community’ is the most promising community that we could ever build.

To be able to work on a project of such reach and impact under the guidance of brilliant developers from across the world drew us towards Probot and the humility, support and niceness of these amazing developers has held us in it!

A member of the RGSoC family for a fourth year now, Gregor is one gem of a mentor. We cannot forget how warmly he welcomed us to the community, inviting us for office hours right on day 1 of introduction. Since then, he has been a constant support, has always kept us motivated and has made us feel so comfortable that we feel that we belong with Probot already! <3

They are both GitHub employees and maintainers of probot for quite some time now. They have been amazing mentors and have always offered help, generously. :’)

A 2016 batch passout from our college, Divjot is a full-time Software Developer at Swiggy. We wouldn’t be exaggerating if we say that he’s the absolute best senior one could ask for. From resolving out most messed up javascript doubts in minutes to giving detailed life lessons (and one liners like “Don’t worry! If you want to give up, you’re doing something right”), he is one person we can always depend on, without a second thought. He’s vegan and Pun-jabi, funny and a hard taskmaster, loves JS and cooks amazing food.

A two-time GSoCer a 2017 passout from Delhi Technological University, Saksham is always happy to help. And not most people will believe but we found him on Quora (Yay, Rahmeen’s infinite quora scrolling is not always useless). Saksham has a lot of experience with Node.js and loves to share his knowledge abundantly. Workaholic as he is, he’s worried about lack of work when we don’t ask him doubts too frequently, and very cleverly this his how he keeps us on our toes. (Don’t worry we’ll trouble you a lot in the days to come XD)

Our batchmate and a 2018 GSocer, Manish is a very good friend of ours. Being a CodeHeat winner under FOSSASIA, he is extremely passionate about contributing to open source and loves to help others too.

A senior year student from our college, Mananpalhas won almost every hackathon he has ever participated it. Being an extremely passionate developer and open-source enthusiast, Manan has this knack for developing some really cool projects. He works actively for promoting open-source among the students of our college and is an amazing person.

A graduate from IIIT Allahabad, Saptak is a passionate open source contributor. A GSoC ‘16 student with FOSSASIA, Saptak is currently working as a Software Developer with Gitcoin. We’re super excited to work with him throughout the summer! 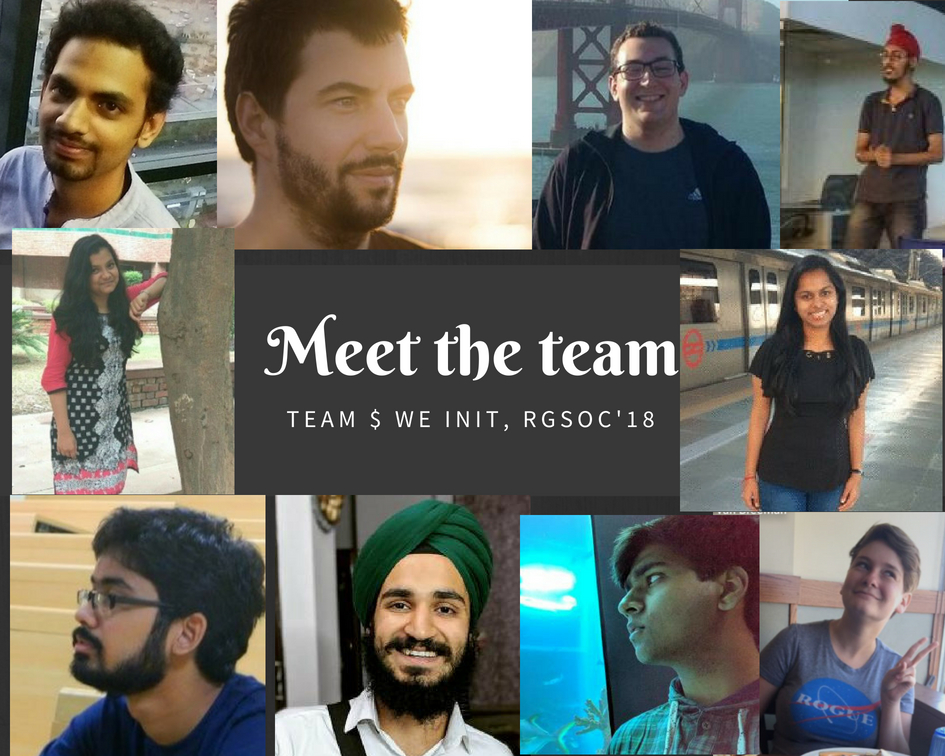 Team $we init (Collage made by Akshita)