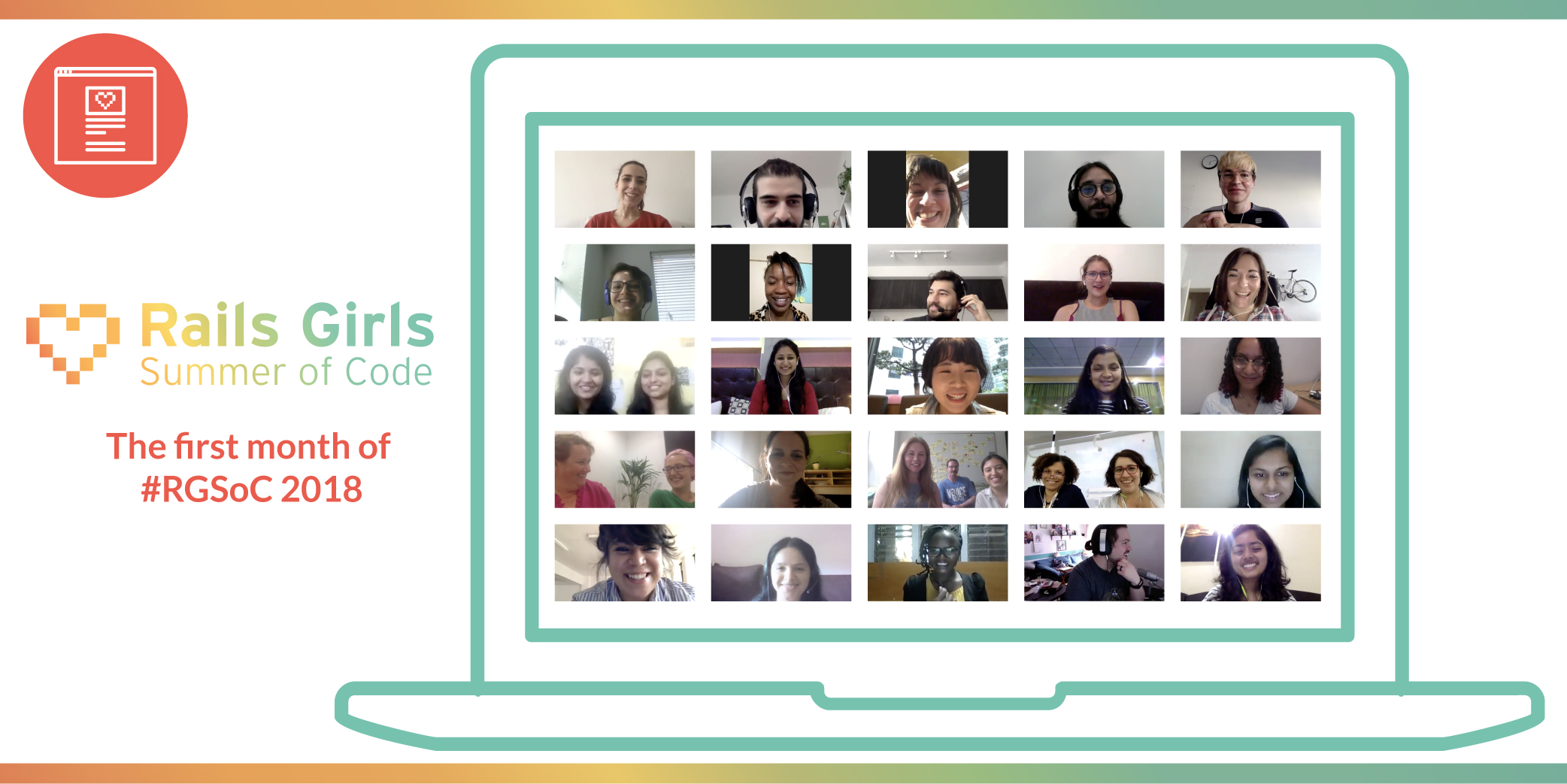 The first month of RGSoC: the Kick-off calls! (image by Ana Sofia Pinho)

The Summer of Code has started and with it, the excitement of a new phase in our lives, paired up with a significant amount of team calls, status updates on the RGSoC Teams App, blog posts, documentation, git and — finally — the first pull requests! Here’s a quick recap of what has happened in the first month of RGSoC, if you don’t follow us on Twitter and Facebook yet. 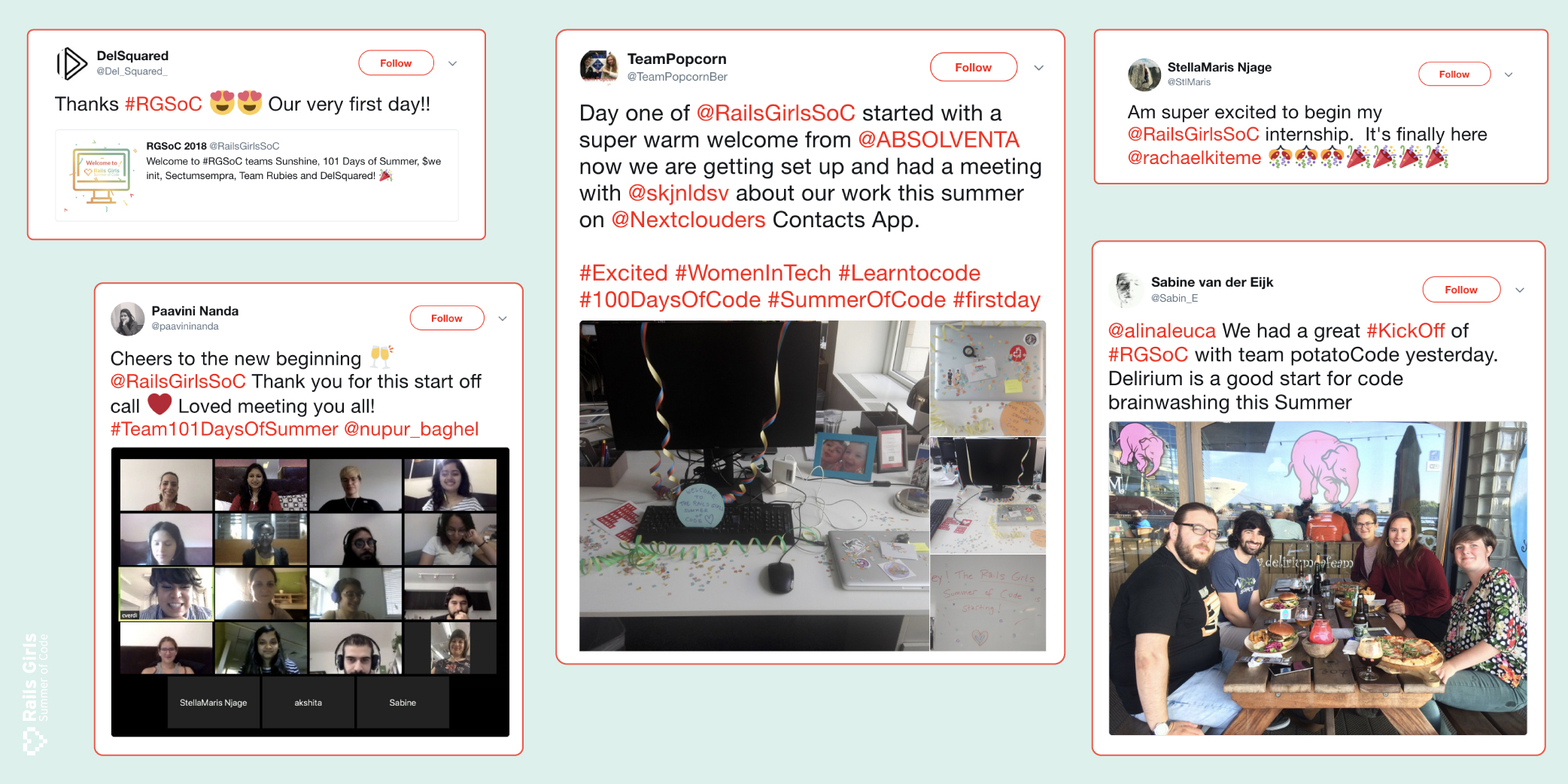 Every year we invite students, organizers, coaches, mentors and supervisors to celebrate the kick-off wherever they are. They are free to organize an event or just meet with their coaches in their working space — and this means that sometimes they get surprised, like team Popcorn. This year we also wanted to make something different, so on the first day of RGSoC invited everyone who is participating on the program for a couple of global kick-off calls. It was great to get to know a bit more of everyone. After the initial intros, the conversation moved to very interesting topics, for instance, the moment we found out we loved to code and the advice we would like to give ourselves if we just started coding now. These kick-off calls are a thing to repeat! 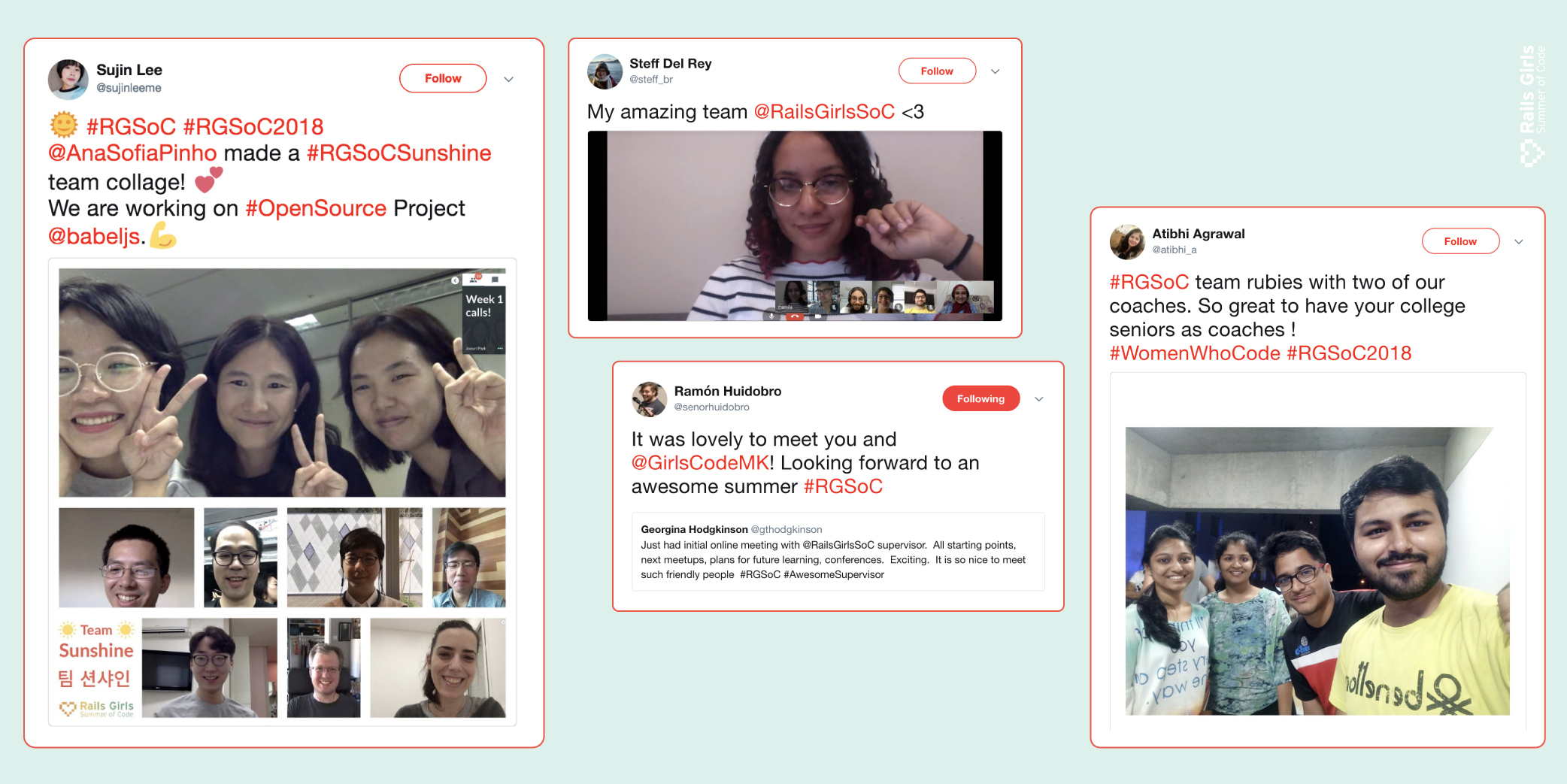 RGSoC Teams are composed by the two students, their coaches (remote or local), their mentors (the OSS project maintainers) and their supervisor (who provides non-technical support). It’s important to start the summer of code with a team call and/or meetup where everyone on the team meets for the first time, discusses the features they will be working during the next few months, how they are going to plan the work and feedback sessions with the coaches and mentors, what they want to accomplish during RGSoC and what their plans are after the summer ends. This might not be very easy for some teams — like the ones that have members in 5 timezones — but it is well worth it and we love to see the pictures they take! :D 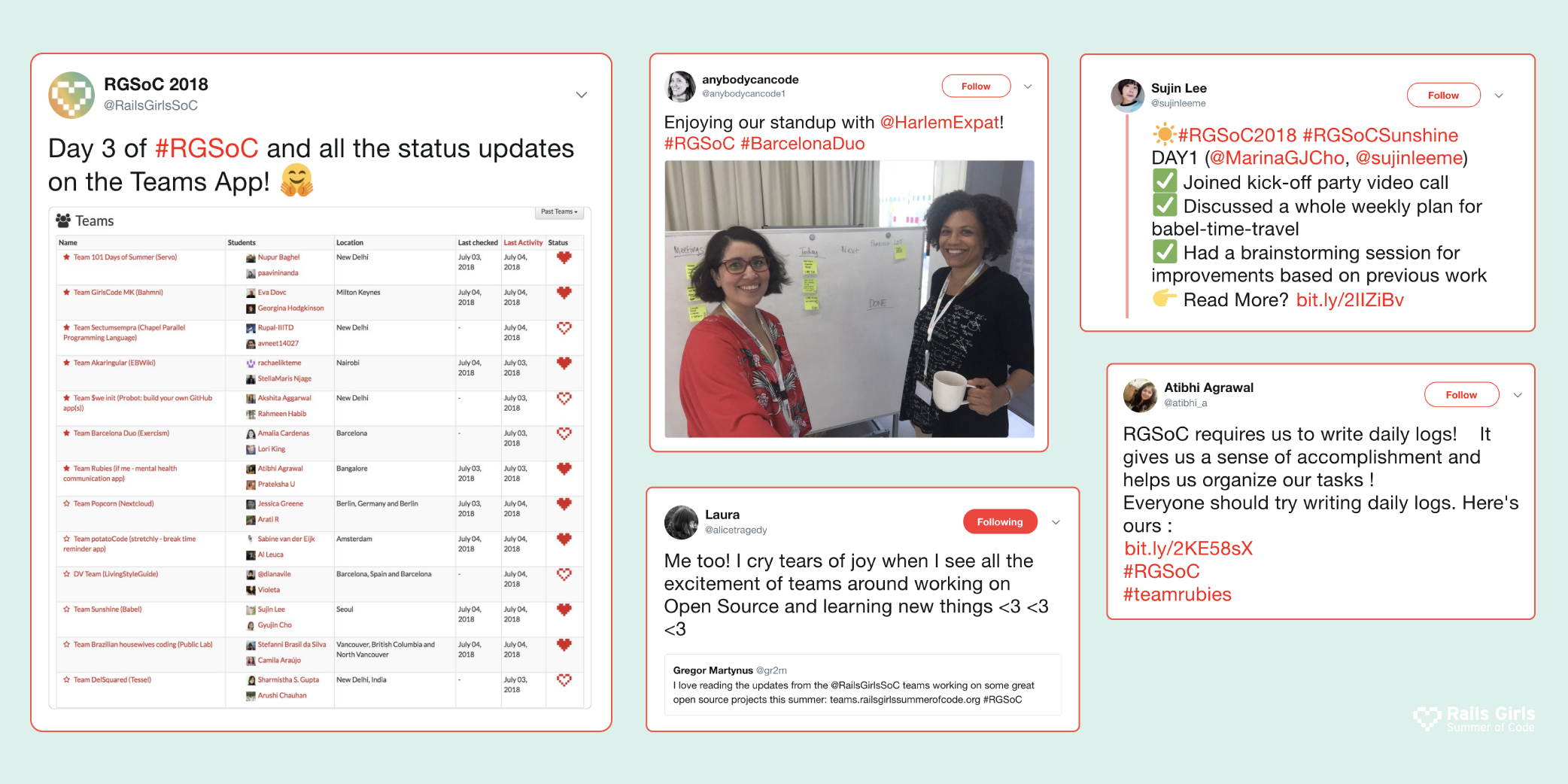 RGSoC is a self-guided program and as such, we want our teams to decide on their own workflow; however we’ve learned from experience that doing regular status updates helps supervisors, coaches, mentors and organizers to follow up on the teams’ progress and see if they need their help. It also makes the students more accountable and helps them work at their own pace. In a way it is also a journal of their days at RGSoC, their achievements, how exciting it was to make their first PRs, the times where they just spent a full day researching to find a solution for that bug… It’s a bit of their story, right? If you’re curious, you can check out these updates here. 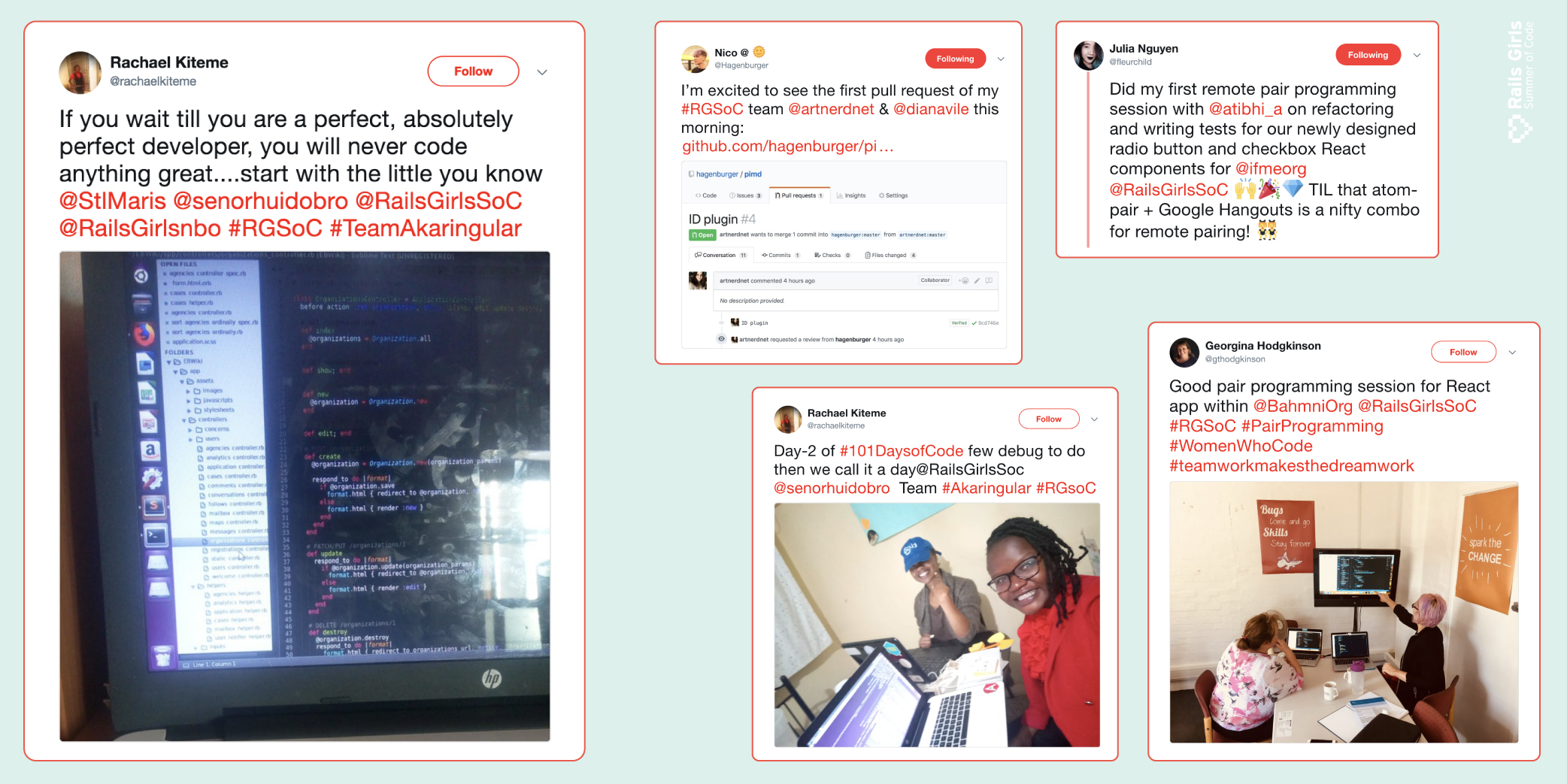 Hands on code and the first PRs

After setting up their projects locally, getting acquainted with the codebase, and reading some documentation, it’s time to dive into the code — in their first couple of weeks, students usually pick small tasks and issues to work on with the help of their coaches and mentor. One of the most thrilling moments of RGSoC is when our students publish their first pull request: It’s a great feeling of accomplishment and for many it marks the beginning of their contributions to Open Source Software.

It’s great to see the weeks go by and our students getting more and more familiar with new programming languages and their OSS Projects. We are all cheering for them! And talking about cheering, we would like to give a huge shout out to the coaches, mentors and supervisors who have been volunteering their time to support our students: Thank You!

Last but not least: Thanks to our donors and sponsors who have made RGSoC 2018 possible <3