Our experiences at GOTO Berlin

The GoTo Conference, my first conference, concluded an already unforgettable summer and I have RGSOC to thank for both. From the morning train ride mentally preparing for the day, to the evening capped off by a social event or a chat with a new acquaintance, I was constantly exposed to new concepts, people, tools, companies and more. For instance, “Functional Programming in 40 Minutes“ by Russ Olsen made me curious about learning Clojure, particularly since he said learning languages was a hobby of his. The timing of the conference couldn’t have been better. It came right at the point where I was starting to try to figure out how to apply my math background to programming. I had the opportunity to meet several people involved in machine learning, a field that is constantly brought up when I mention my intention, and attended enough talks about the subject to have an understanding of what it involves. The main impression I was left with, however, is that of being intensely inspired. I had expected to be exposed to new concepts, technical information and tools. What I hadn’t expected was to gain insights in other areas of my life. One particularly inspiring talk was “How Software Can be a Force for Good”. Hearing Francesco Mondora describe the unconventional approach to business at his company renewed my hope in the impact a single person can have on the world. Their emphasis on making a positive difference, whether it is to the environment or in the lives of the people working at the company, has given me a lot to think about for my own life. It has shown me the work place as a context to not only live out your values fully, but also to support them in a way that only a team can. 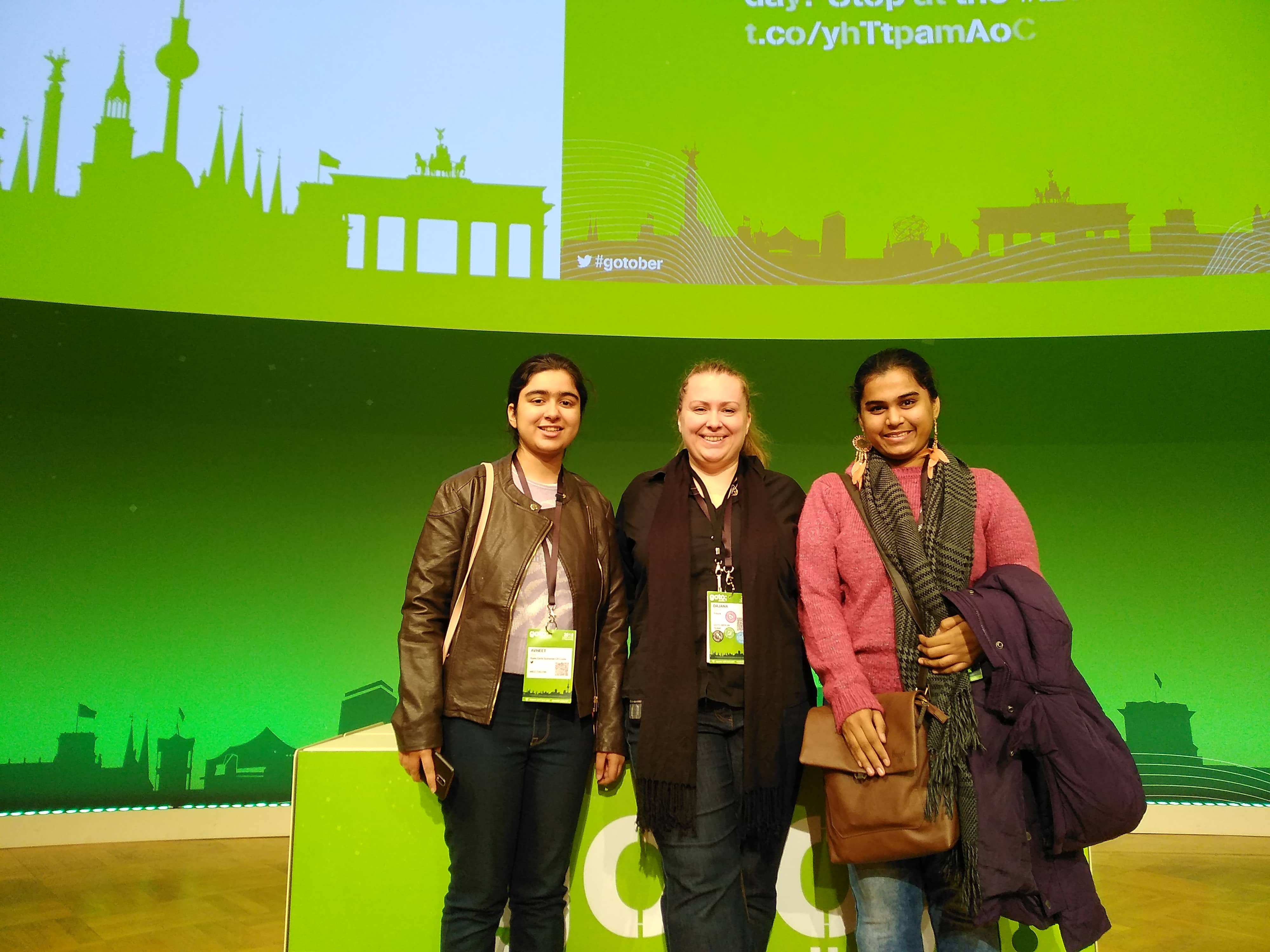 We were welcomed on the first day by the volunteers at the registration booth. As we stepped into the hall for the first keynote, it was huge and full of motivated technologists. We were overwhelmed by the atmosphere and felt great to be part of something so huge. We seemed to be a little late for the first keynote. After it ended, we decided on which talks to attend for the day and proceeded with it. There was an interesting session on paving careers in technology by various professional leaders in technology. They talked about how their journeys in tech have been and how many of them became leading CEOs and founders of companies, even after following unconventional career paths. We did realize at that moment that its necessary to continuously improve and adapt to different tools and technology in order to excel in the field. They also talked about career expectations we should have and how we should not be afraid to leave a company to join another if we feel that we are not getting the right dues. They talked about the importance of diversity in technology and how their respective companies are promoting it. We were overwhelmed with the heaps of information we gathered and quickly jotted down as much as we could.

Another interesting talk we attended was based on how Information Technology plays an important role in CERN. The talk also talked about how IT has led to the overall growth of the particle physics laboratory in the past so many years. Moreover, it was surprising to know that running that particle physics laboratory takes so much of electricity that takes up most of a country’s electricity.

We were extremely excited on this particular day as we were supposed to give a talk on our RGSoC journey and motivate other girls as well to participate. This was our very first talk and we very nervous and excited at the same time. We were elated to see how enthusiastic the girls were when we started to tell them about RGSoC. They cheered on as we shared our experiences about how wonderful the journey has been. They were quite amazed by the opportunity and were looking forward to apply.

Further that day we attended a very interesting talk on “The mathematics in Simpsons” which sounded quite bizarre at first but it turned out to be the highlight of the day. Simon Singh the author of the book by the same name as the talk opened the talk by narrating an intriguing anecdote about how he met the writers of the show “Simpsons”, and interestingly all of them were mathematicians. His talk was centred around the various instances of cleverly inserted mathematical concepts and figures into the show “Simpsons” and how the writers’ love for mathematics found its way into the show. He concluded his talk by narrating another interesting anecdote of how a famous singer changed the lyrics to her song after Simon pointed out a few mathematical errors in the lyrics!. The crowd cheered as he played the corrected version of the song and the hall was soon filled with huge rounds of applause. Another funny thing that we observed was that before his talk, the stall where his books were kept was empty, but as soon as his talk was over, people rushed to the stall and started asking for his books. My teammate Rupal was just lucky enough to get the last signed copy. After a day of technical talks revolving around various aspects of technology, Simons talk proved to be a great refresher and lightened the mood.

Later in the evening, we attended the GOTO Gathering, where, all the attendees had gathered to play interesting games while enjoying a great time together. After a cheery evening day, we went back home with happy smiles and with great enthusiasm, looked forward to attending the next day. 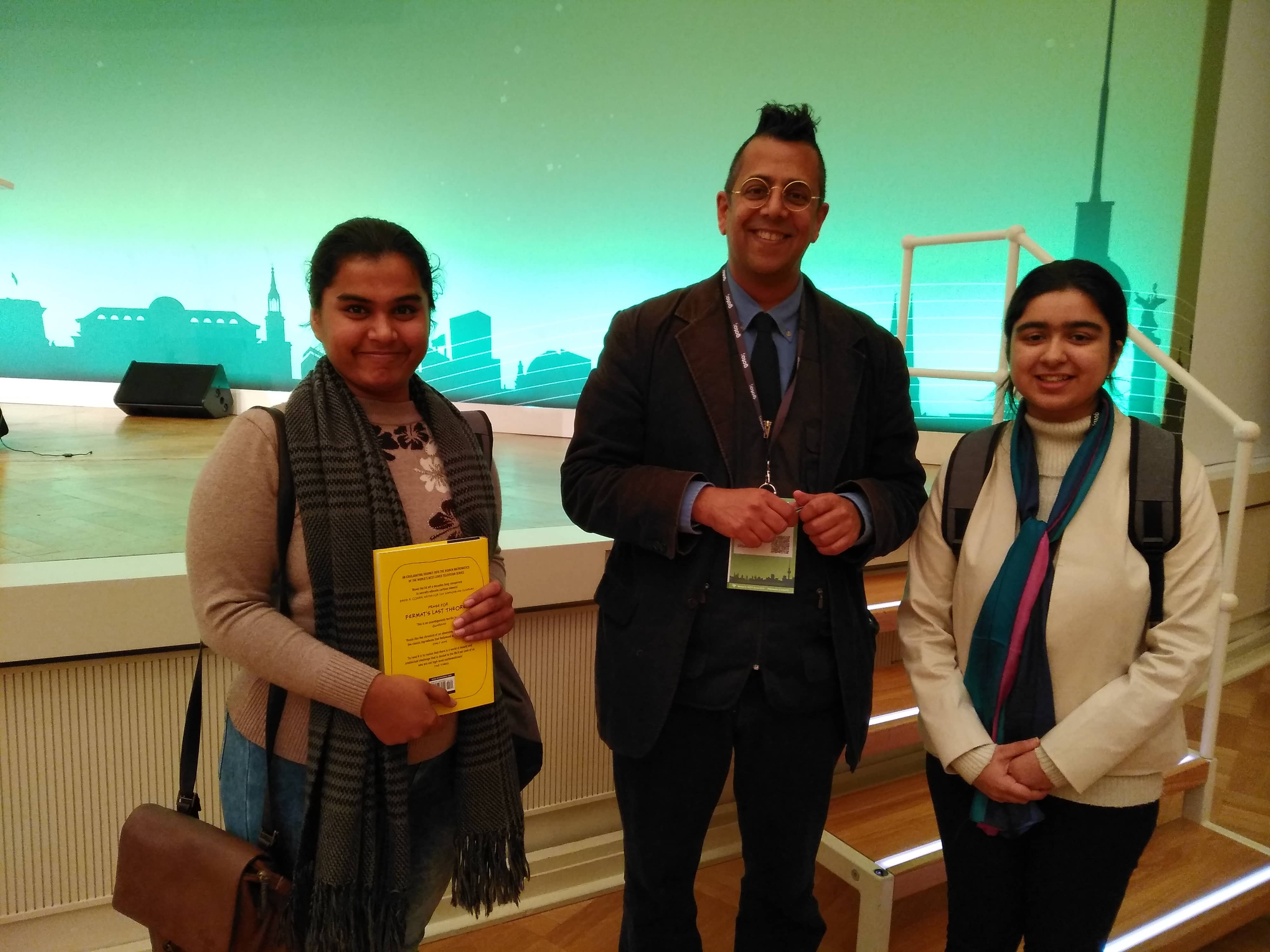 On this day we attended various talks on topics such as Blockchain and its applications in industry, Languages of the Future, Agile development etc. We quite enjoyed the one on applications of Blockchains. The talk was based on various ways in which blockchain technology could be adapted into daily life. For example, the speaker explained how a good implementation of blockchain can be used to trace grocery items, like a how a banana reached a particular home after being passed through a chain of farmers, wholesalers, and vegetable vendors. Moreover, it even talked about how use of blockchain can do away with the need for physical documents and hence the trouble when a physical document such as a permanent residency card or passport are lost. Further we learned about the challenges that prevent blockchain from being widely accepted and used in the industry. Further we also attended a talk on PoP songs and Machine Learning which was quite interesting, followed by another talk on how its important to focus on Software principles first and Machine Learning second. Then we met other scholars, made friends and had a great time sharing our knowledge with them as well as learning from them.

All the talks we attended gave us a new insight to how technology is being used in various ways and how it is continuously growing. We learned about interesting concepts of frugal innovation, changing the lives of people in developing countries. We also learned about how important it is to start teaching young children to code to prepare them for the future. 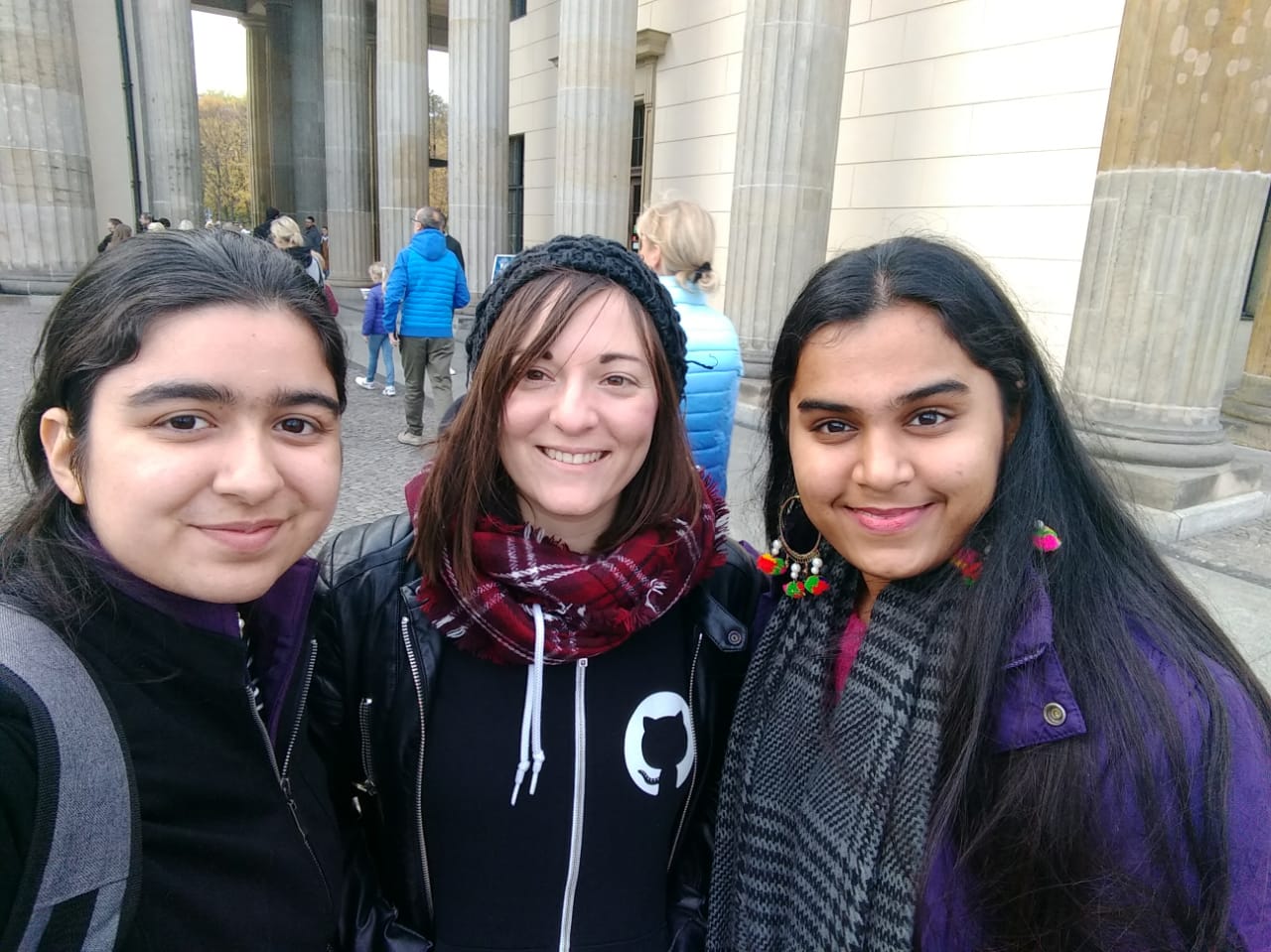 Interestingly, on our last day in Berlin, we met Laura, one of the RGSoC organizers, and she was really kind to show us around some of the great places in Berlin. We are really grateful to her for that, and my teammate rightly said, “Laura made us feel home in Berlin, and made our trip a memorable experience.” All in all, we had a great time at GoTo Berlin conference and we are really thankful to the RgSoC organizers for providing us the opportunity to attend and make memories of a lifetime. It was a great learning experience and we consider ourselves very fortunate to be able to attend the event and also learn so much from the technologists of today.