In 2013, we kicked off the first edition of RGSoC: What an adventure it’s been since then! 2017 marks our 5th birthday (time flies!), and with a little bit of your last-minute help and support, we have 4 days left on our campaign and with your help can reach our funding goal — let’s celebrate this moment by taking some time together to look back and see where it all started. #5YearsOfRGSoC

Back in the day, we started the program kind of low-key, and the very small organiser team at the time managed to “just make things happen” by joining forces with members of the local Berlin community — one example among the many is Becci, who provided us with awesome illustrations for our website and even designed a team building game for the 2013 teams. Without too many frills (and with a lot of cat gifs), RGSoC managed to raise roughly $80,000 to support women entering Open Source. Because of the grassroots nature of the program, registration at the time was open until June 7th, meaning roughly a month before the summer of code started! Pretty wild, considering our deadline for registration in 2017 was March 8th.

Our participants in 2013 (19, for a total of 10 teams) were spread out across the globe and some were working remotely with each other; we had teams in Poland, the USA, Colombia, Germany, and more! 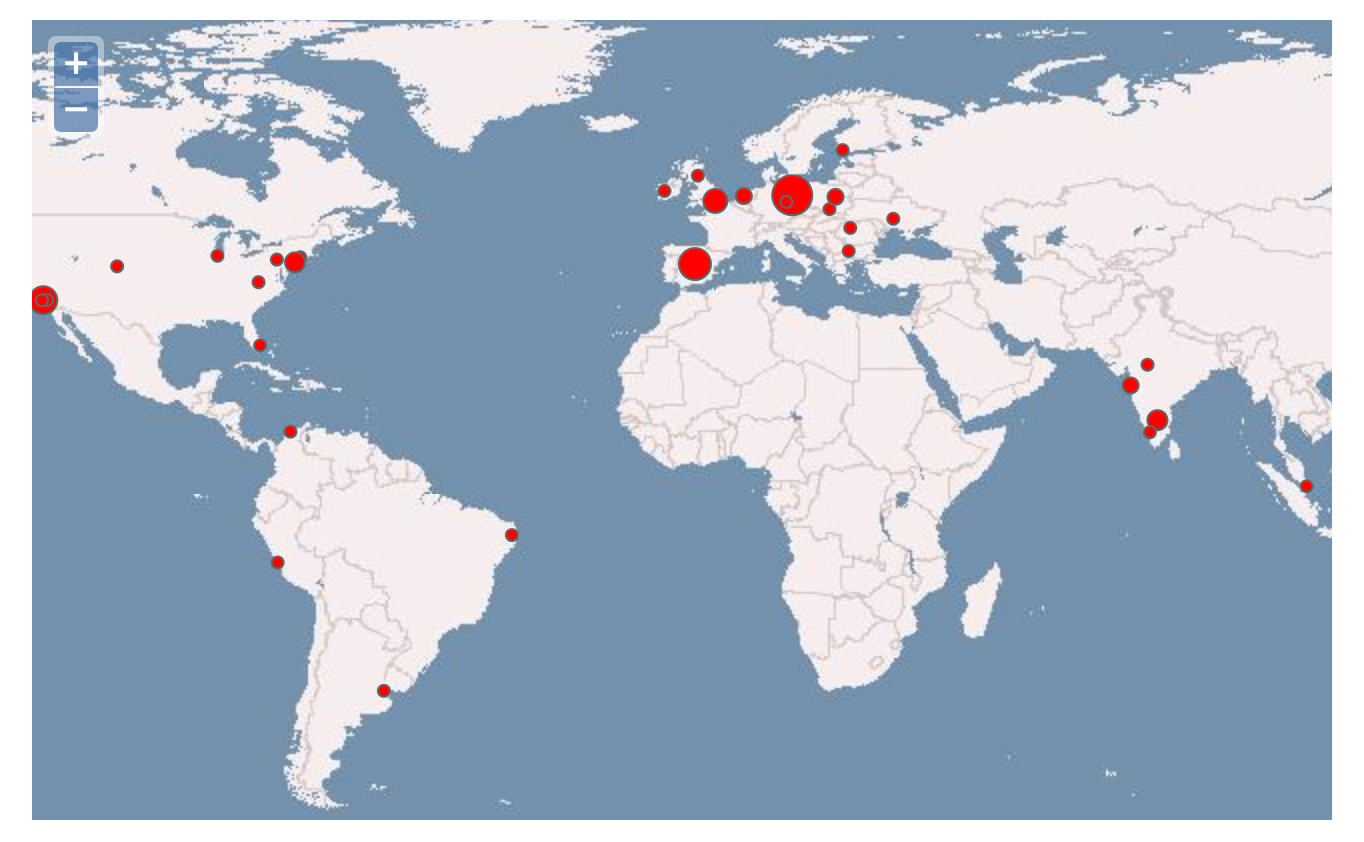 One of the special highlights of 2013 was the amazing support we got from the community, validating our work right away. The (now sadly defunct) boxer shorts company “Unerdwear” even did a pre-launch of their unisex limited edition Rails Girls boxers, and all profits were donated to RGSoC. <3

2014 was the year we got a little more organised. We introduced a Code of Conduct and our Trust Committee, to help us handle Code of Conduct breaches; that year, we also introduced supervisors from the beginning of the summer (instead of halfway-through as we did in 2013), to help better support all of our teams, sponsored and volunteering. While our application rate stayed roughly the same, we were able to collect more funds for our teams and had participants in new locations (such as Peru and Australia).

The organisers team also grew a lot throughout the preparation phase of the 2014 edition — so many people from the Berlin tech scene and beyond started helping out, working on the Teams App, offering to supervise, coach, and write posts on our blog. You can find a few of them here <3 — with their messages about RGSoC and the soundtrack of their summer!

90% of our participants stay in tech

In our third year (2015), we started to focus a little bit more on our website and appearance to the outside. With the help of Claudi (our volunteer designer with superpowers!) we reworked our landing page, giving it a cleaner look — that’s the very same version we have today! We also surveyed our 2013 and 2014 participants, and found out some amazing facts: Our program empowered them in such a way that out of the surveyed participants, 90% of them found jobs in the tech industry, 55% were still contributing to Open Source software regularly, and 8% had even founded their own company or start-up; this reinforced our belief that RGSoC was changing women’s lives for the better.

In 2016, a lot happened: for the first time, the amount of applicants doubled from the previous year, showing an extremely high interest worldwide to participate in the program. As we did the previous year, we surveyed our past participants to find out where they were at and from the survey results and found out that 75% of the 36 participants who answered the survey were still contributing to Open Source Software and that roughly 95% were either studying, working, or doing an internship in a tech field.
In spring, Anika, Sara and I flew to Kansas City to receive a Ruby Hero Award on the stage of RailsConf on behalf of Rails Girls Summer of Code — for the program’s work in making the Ruby community a better place. You can read more about this, about the context and our feelings about collecting this award in this blog post. 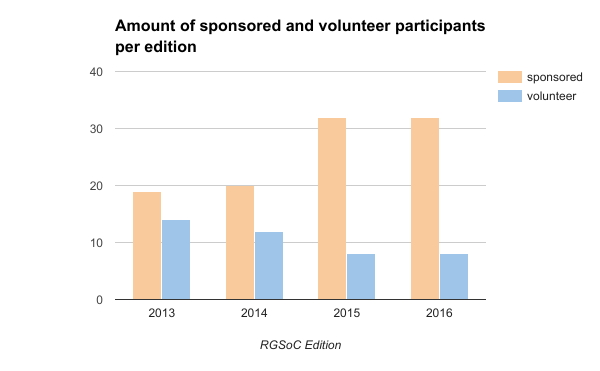 That year, we went on to accept 40 participants overall (16 sponsored teams and 4 volunteer teams, the same as the previous year). While 4 volunteer teams may seem like a small number, especially in comparison to to our numbers in the past, it’s important to note that volunteer teams get the same support from us as sponsored teams do, so we need to limit the number of participants that our team can handle. And that’s a good thing! That way we can ensure everyone gets treated the same way and gets the same possibilities — which is also why all teams, regardless of whether they are volunteer or sponsored, go through the same application process.

Can’t wait for May

This year, we received 190 team applications — more applications than ever before, more than double the applications of last year, even though our application process has developed into a very extensive and competitive one and is far from the one we had in 2013! With every year, we’ve improved the process a little bit, taking feedback from coaches, mentors, students, and supervisors into account. We’re currently in the middle of our selection process, and can’t wait to get to know our 2017 teams. 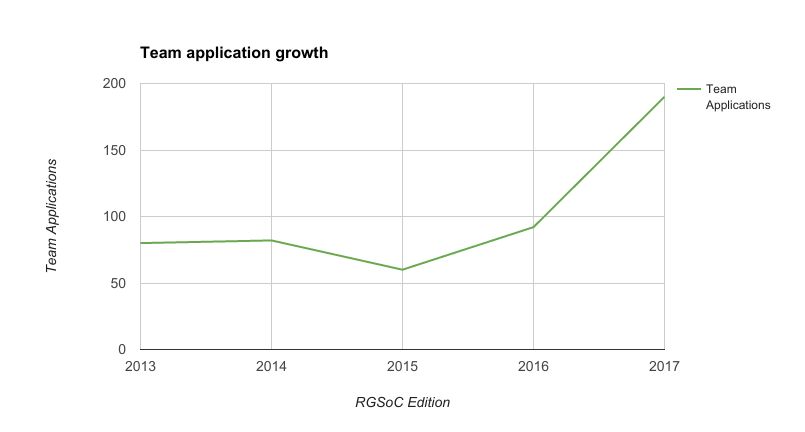 Look at the growth in the number of team applications over the years! (Image: Laura Gaetano)

Our team has grown, but it’s still pretty small (3 core organisers, 10 organisers in total) considering all the work that goes into making RGSoC a reality every year. This work is possible only because of long-term commitment from organisers (who are mostly volunteers) and from sponsors, who help fund teams every year. This year, with 380 people applying in total, we’ve set ourselves the goal to fund 12 teams (24 participants) across the globe; and for this, we need your help!

Our donations as of April 10th, 2017! (Source: railsgirlssummerofcode.org)

In the next 4 days, you will still be able to donate to RGSoC to help support teams for this year. We’ve already funded 10 teams with the help of our sponsors and of individual donors — but we know we can do better! If there are any companies you want to reach out to, we’ve prepared a small document for you with a step-by-step to reach out to your contacts. Let’s get the last one and a half team funded! 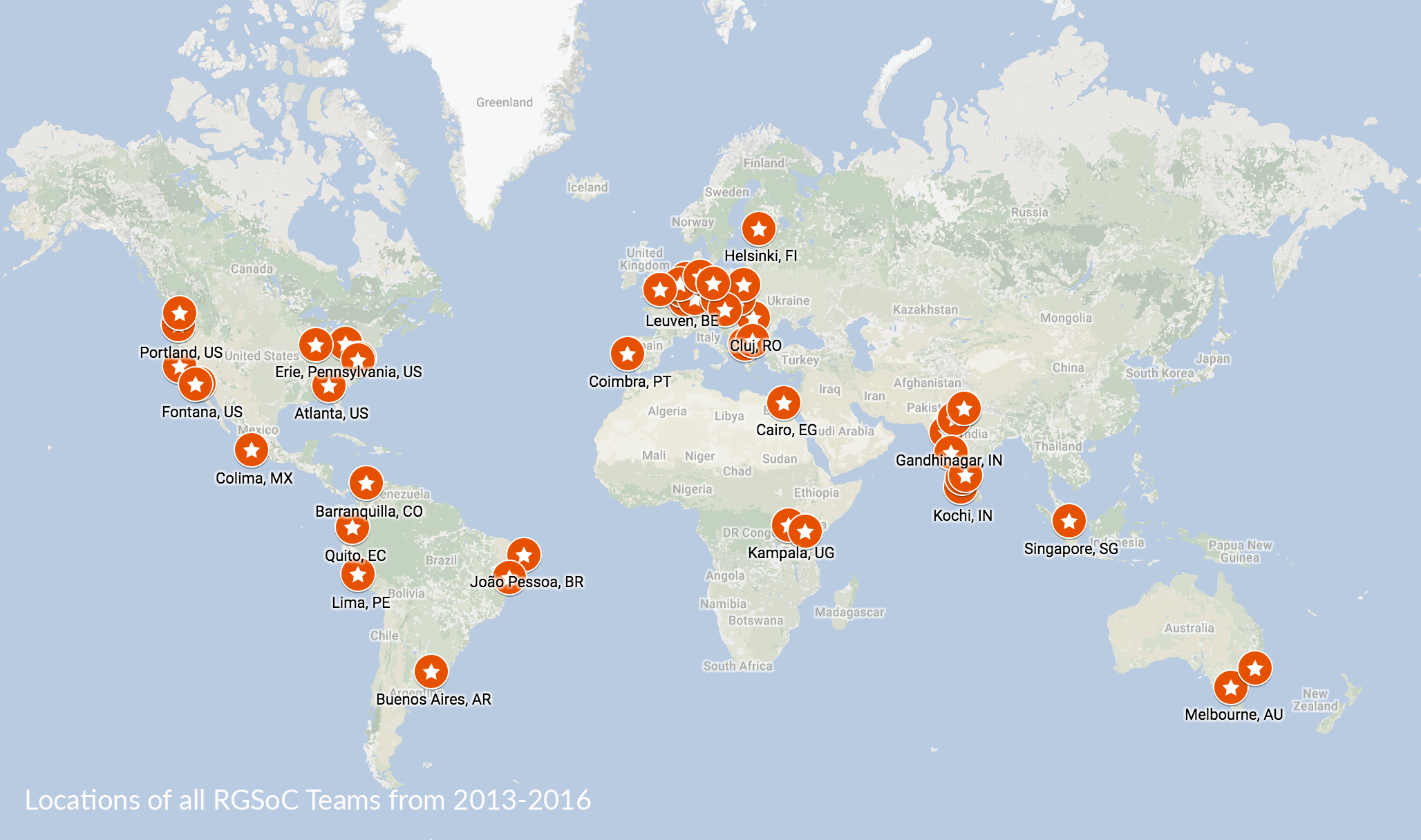