Almost two months have passed since the end of Rails Girls Summer of Code 2017, and we can’t shake off this blue feeling. After 3 fantastic months working with extraordinary people from all over the world - we miss it badly!

To help us cope, let’s take a little trip down memory lane!

Our fifth year in numbers

This year marked the fifth anniversary of RGSoC and the summer went on with a blast! If you don’t believe us, just look at the numbers:

We are so proud of our 20 teams, the goals they achieved this summer, how they have overcome the obstacles in their paths and how much they have grown! Some of our participants are already working in tech and we couldn’t be happier!

We couldn’t have achieved this without your help! You that donated to our campaign and sponsored these teams, you that mentored them during the summer, you that offered volunteer technical support and you that helped us organize and support RGSoC - you all contributed to make this summer a reality! Thank you!

The end of summer was commemorated all over the world, with public celebrations in Berlin, London, Amsterdam, Copenhagen, Tirana and Pristina. Some unofficial parties are still going on, as members of our ever-growing community keep bumping on each other at conferences and events! 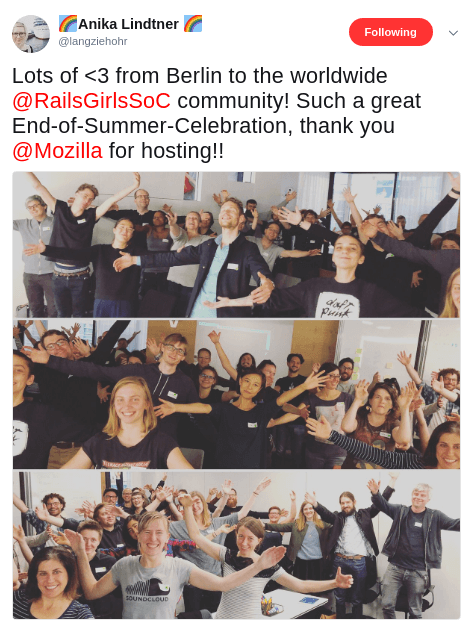 This October, some of us got together in Vienna, while others joined up remotely, to wrap-up this edition of Rails Girls Summer of Code and to kick-off the 2018 edition!!! Yes, we are already working hard on that! And we will be back soon with news, so stay tuned!

We are growing our team! If you are interested in helping us diversify tech, just send us a message - we’ll be happy to meet you!